Jacobs' father is Lamont Marcell Jacobs Sr., an African American serviceman, while his mother, Viviana Masini, is an Italian. His parents met at  Caserma Ederle in Vicenza, Italy, when his father was a United States Army. Later, Masini and Jacob moved to Fort Bliss in El Paso, Texas.

When he was three weeks old, his father was transferred to South Korea, and Little Jacob relocated to Desenzano del Garda with his mother. However, his parents separated when he was six months old.

Initially, Jacob played basketball and football, but after his football coach, Adriano Bertazzi, discovered his speed, he suggested that Jacobs try sprinting. However, Lamont initially started as a long jump player and could not get success in it. The player later moved to sprints.

Jacob started athletics at the tender age of ten and began the long jump in 2011. After training for six-year, The athlete earned his first medal at the 2016 Italian Athletics Championship. That six-year, he made the Italian Athletics Championships in the long jump. After practicing lon-jump for almost a decade, Jacobs took a u-turn in his career and started practicing for sprints.

At the 2020 Olympics, Jacobs won the gold medal in a significant upset, crossing the finish line with a time of 9.80, which saw him in new European record and was the quickest time ever by an athlete from outside the United States or Jamaica, Jacobs becoming the 10th fastest man of all time.

Marcell started competing in 2011, but it took time for him to earn international recognition. The athlete started his career as a long jumper but later switched to sprinting. Jacobs won the 2016 Italian Athletics Championships in the long jump. He could not participate in the 2016 Summer Olympics due to a hamstring injury. 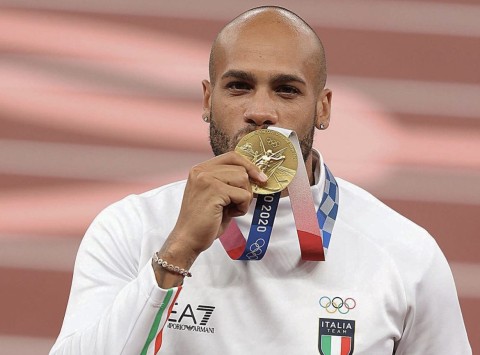 Due to his outstanding achievements, Jacobs was selected by the Italian Olympic Committee to be Italy's flag bearer during the Olympic's closing ceremony. Jacobs took his form in the 2021 season, winning gold at the European Indoor Championships in the 60 m and World Athletics Relays. In 2022, Lamont won a gold medal at the 60 m World Indoor Championships.

Jacobs is unmarried but has been in a relationship with Nicole Daza for a long time. Daza was born in Manta, Ecuador, and is a fashion model. In 2019, the couple had their first child, Anthony, followed by Megan (born in 2021). 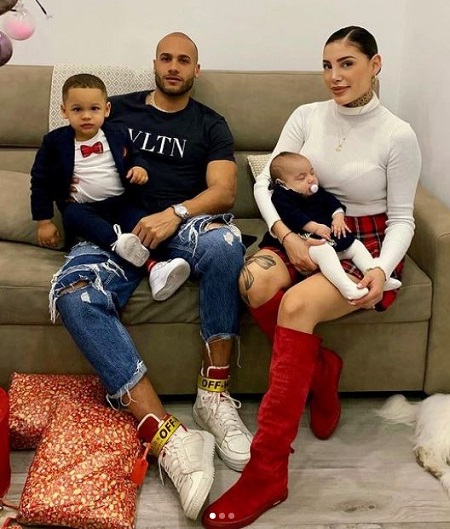 Marcell Jacobs with his wife and children SOURCE: [email protected]

He also has another child, a son, Jeremy (born in 2013), from a previous relationship when Jacobs was nineteen. The Jacobs family lives in Rome.

Marcello Jacob, a gold medalist at the 2020 Olympics, has earned a decent sum of money throughout his career.

A professional track runner with no major sponsors can make as little as $10,000 to $15,000 per annum. Only a select few track runners make the big bucks. Besides the prize money, track and field sprinter and long jumper's income is heavily influenced by endorsements. As of 2022, Marcell Jacobs' net worth is under review.