One of the top footballers from France recently gained a lot of attention, but Kylian Mbappe would probably rather not have the spotlight on him so much. Aside from his choice of dates and partners, the French soccer player gained heat from Alian Beral from KFC France. Although the friction between the fast-food giant and Kylian settled, KFC France name-dropping, the French player made the fans wonder what was happening behind the sense.

Back to the topic, fans raised their eyebrows when photos of Mbappe and the trans modal Ines Rau surfaced. Ines made history when she became the first trans model featured on a Playboy cover. Likewise, much to fans' curiosity, the duo's silence keeps the world on its toes. And what's more interesting is that Kylian dated Emma Smet in the past; unlike his current relationship with Rau, he and Smet were open about their love interest.

Kylian Mbappe and Ines Rau were seen together at the Cannes Film Fest! Allegedly, they are an item!

After his last break-up with Emma Smet, Kylian Mbappe allegedly has already found a partner. More recently, in August of 2022, Mbappe and Ines Rau were spotted at the Cannes Film Festival. 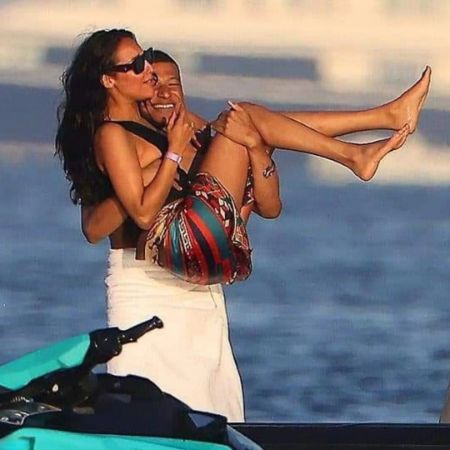 Kylian Mbappe is carrying the alleged Ines Rau in his arms. SOURCE: Instagram

And later, pictures of Mbappe and a woman surfaced on social media sites. And many quickly jumped on the photo stating that the lady in the picture was Ines. And after months of silence from both Rau and Kylian, fans took it upon themselves to find out about the mystery woman.

Even after the world kept asking the duo about their relationship, Mbappe and Rau kept a tight lid on the topic. After a month or so, the pair stays out of sight and wants the storm to pass as Kylian furthers his career in silence.

But their silence about the topic isn't working, as the fans keep asking Mbappe and Rau. And now, many fans say that isn't Inse on the picture at all. What's more, they spent hours, days even, searching for the elusive lady with the French footballer. Some people on social media claim it's a person with the username Inès__c on Instagram. However, the said woman currently keeps her profile in a private setting.

Many spotted Ines with the footballer the night before the pictures became public!

Seeing is believing; that is a universal truth, and many fans spotted Ines Rau with Kylian Mbappe the night before the said pictures became public. The previous night, Rau and Kylian shared a table at the Cannes Film Fest. And fans and media jumped the gun when they spotted the French footballer cozy with a woman. 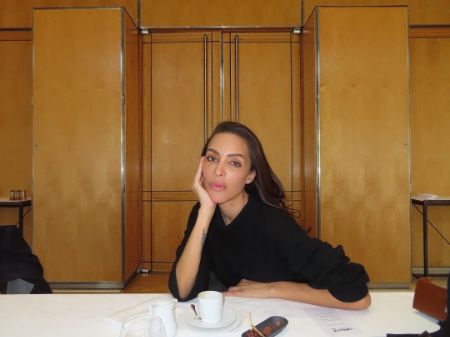 Ines Rau having lunch at the Ministry of Economy and Finance. SOURCE: [email protected]_ines

Rau has been in a relationship with Staiv Gentis since 2015. Although Gentis likes to avoid the spotlight, Ines would probably talk about her breakup with her boyfriend, especially if she and her partner have been together for half a decade!

Kylian Mbappe is an attractive man, so, naturally, he'd be connected to some of the prettiest names. And before this who is that lady with the footballer thing began, Mbappe dated the French actress Emma Smet and the model Alicia Aylies. Kylian Mbappe was getting out of his car. SOURCE: [email protected]

Unlike his professional life, Mbappe enjoys keeping his love life hidden from the public. As such, the handsome young footballer kept his relationships with Smet and Aylies mostly away from the media. And unlike his current situation, Kylian was upfront about his relationships.

Aside from Rau or not Rau thing, Kylian Mbappe is also facing friction with his team's sponsor, KFC France. This situation with KFC began when the vice-president of KFC France, Alain Beral, sent out a threat to the players and the club.

Beral stated that the fast-food giant paid good money for what they wanted the players and the club to do to promote their products. But when Mbappe refused to do what they asked of him, Alain said they would "enforce" their rights if they had to.

However, KFC France formally apologized to the players and the PSG. And fast-food chain also added the words spoken by Alain were not that of the company but a personal view of Beral. Likewise, the vise-prez speaking about his functions as the president of the National Basketball League at the time.