Kristoffer Olsson is a rising Swedish professional football player. He made his professional debut in the English Premier League club, Arsenal but played his first game for the Danish league club, Midtjylland. Olsson currently plays for the Krasnodar in the Russian Premier League since 2019. He plays as a midfielder for his team.

Kristoffer Olsson was born Mats Kristoffer Olsson on June 30, 1995, in Norrkoping, Sweden. He is the son of Mats Olsson and his wife. Much about his parents and early life is under the radar. Kristoffer stands five feet and ten inches tall and weighs 70 kg.

The Swedish International started training with his hometown club, IK Sleipner and IFK Norrkoping. Olsson rejected the offer for a trial at English club Chelsea. Many big clubs were interested in signing him, but Kristoffer moved to Arsenal youth club for £200,000 in 2011 and played with its youth team until 2013. Before making his playing debut, Olsson moved to FC Midtjylland in September 2014 for a loan. At the end of the season, the Danish club announced that a permanent deal had been agreed with Arsenal.

Kristoffer signed a three-and-a-half-year contract with the club. In the next three years, He appeared in forty-four games and scored two goals. In January 2017, Olsson moved to the Swedish football league, AIK. The Swedish player played in fifty-eight games and scored three goals until the end of the 2018 season. In January 2019, Olsson signed a contract with FC Krasnodar of the Russian Premier League. Since then, Kristoffer has played in fifty-nine games and score four goals.

Kristoffer has represented Sweden at various youth levels. He made his international team debut in 2017 with the Sweden U17 team. In 2012, Olsson started with the Sweden U19 and for the Sweden U21 in 2014. Kristoffer scored more than ten goals for the youth teams. He was called for the senior team in 2015 but missed the games after breaking his leg. In May 2017, Olsson was part of Sweden's squad for the 2017 UEFA European Under-21 Championship.

Olsson has twenty-seven international caps for his national team along with Seb Larsson and Pontus Jansson. He is included in the 2020 UEFA EURO team.

Kristoffer is married to his longtime girlfriend, Sofie Maria Olsson. The duo tied their wedding knot on May 22, 2021, in his hometown. They had been dating each other for several years before walking down their wedding aisle. 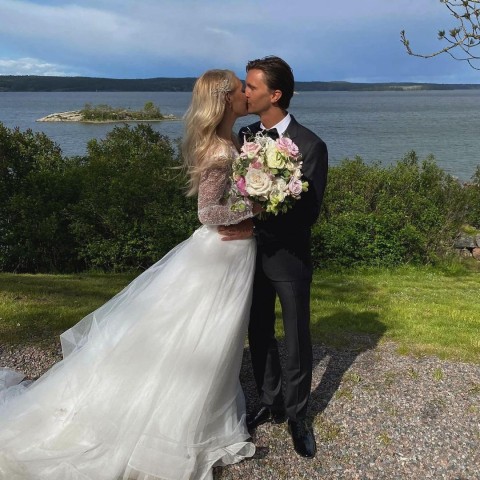 Kristoffer and his wife Sofie at their wedding day SOURCE: [email protected]

In September 2020, Kristoffer and his then-girlfriend, Sofie, welcomed their first child, Jamie.

Kristoffer Olsson's Net Worth and Salary

Kristoffer Olsson has an estimated net worth of more than $2 Million. As per sources, Olsson has a weekly wage of £22,000 of an annual salary of £1,144,000 with Krasnodar. He is among the highest-paid player in the league. As a football player, Olsson must be making a handsome amount through his sponsorships and advertising deals.