Konnor McClain is a professional gymnast from America. She is a member of the United States women's gymnastics team. Konnor performs artistic gymnastics. She has been part of the USA team since 2015. The American international offers an exceptional talent to the USA gymnastic team. Also, Konnor is the 2019 City od Joroso Trophy and the 2019 U.S Classic Junior all-around Champion.

Konnor McClain, the Las Vegas, Nevada native, performs at the senior international Elite level. Currently, Konnor is training in the World Olympics Gymnastics Academy in Plano. Konnor has represented the USA in numerous tournaments worldwide. To your knowledge, Cross Lane's hometown gymnast is the Bronze medalist of the 2019 Junior World Artistic Gymnastics Champions.

Everything on Konnor's family details and early life

Konnor McClain, the USA Gymnastics team member, was born in 2005. Konnor lit up her birthday candle every February 1st of the year. As of 2022, the athlete is just 17 years old, and her zodiac sign is Acquarius. She was three years old when her family resettled in West Virginia. She came from an athletics background as her mother and father were athletes. She is born to her mother, Lorinda McClain and her father, Marc McClain. Both of his parents are of American descent. As mentioned earlier, his parents came from an athletic backdrop as her father, Marc, played football in Sothern, Utah. At the same time, during high school, Lorinda was a cheerleader and played football. Moreover, Lorinda is also a gymnastics coach; she coached Konnor in her early days. As per the statement given by Lorinda, Konnor stated backbend kicks when she was 20 months old. Notably, her Father Marc is no more with them as he tragically died due to covid in December last year. Konnor is one of the fourth children in her family. Besides her, she has two brothers, Cole McClain, and Duce McClain and a sister Olivia McClain. Among the four, Duce is the youngest and is associated with the California basketball academy.

Furthermore, Cole played football at college while Olivia played softball at Nagara University. All the McClain siblings are very supportive and closed with each other. All her family members practice the Christian religion. Nevertheless, talking about her academic qualification, Konnor is doing her high school studies at Louisiana State University. At the same time, she is also a part of the LSU gymnastics team.

Finding her relationship status now seems challenging as there is no news or rumors of his dating or love life anywhere. Moreover, 4x national team member Konnor has not expressed her love of media. Also, no post on his social media handles hints about relationships. Perhaps behind the public eye, she might be in a relationship with some and is waiting for the right to reveal it. Because of her self-centered personality, anything concerning his love life details is strange to the crowds.
Further, she is not seen hanging out with any partner. Thus, she is assumed to be single currently. We will keep updating our tabloids on this matter as soon as it is available.

Lorinda was amazed by her daughter's back-bending flip at 20 months old. Later, knowing her daughter's talent, she joined her in the Gymnastics school and coached her under coach Susan Brown. After years of training in 2015, the Las Vegas-born athlete made his first presence in the Junior Olympics Program at age 11 and competed in various HOPEs competitions. Finally, in 2017, Konnor qualified for the Junior Elite. In her Elite debut, LSU gymnast ended at 21st in all round. In the time duration from 2018 to 2020, the 2019 City of Jesolo Trophy champion in several tournaments at national and international levels.

After finishing in first place in National Gymnastics Championship, Konnor was added to the USA Gymnastics nation team for the first time. Since then, she has been associated with the team. Subsequently, she helped the team win the silver medal behind Russia, But at the individual level, she capped a gold medal in the all-around. However, her senior Elite debut came at the 2021 winter cup while competing on vault and beam. Besides, the other four gymnasts, Konnor got featured on the Peacock docuseries golden (The Journey of USA's Elite Gymnast). 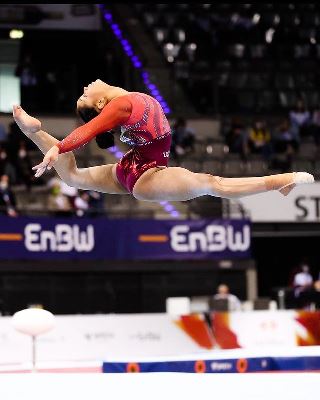 Later in October 2021, along with Leanne, wong and two other gymnasts, she was named for the 2021 World Championship. In 2022, competing in the Winter cup, the American international won the all-around competition defeating Skye Blakely and eMajey Frazier. Konnor is one of the most crucial team members of the USA team who has helped her team win gold medals in numerous tournaments and cups. At present, she is trained by Valeri Liukin, a coach from Kazakhstan.

Bank balance and earnings from her gymnastics career

Konnor McClain is just 17 years of age. Despite her young age, the teenager has a good taste of success at the moment. Meanwhile, she has already established herself as one of the essential members of the American Women's Gymnastics team. For your information, Konnor netted a massive bank balance after winning U.S Classic Junior All-Round Champions. She is in her teenage period and still yet to make a million in the near future.

Well, the American gymnast average earns as high and as low as $18,000. But most of them net their wage in between $31,000 to $62,000 per annum. In addition, the USA facilitates its players with other benefits, including health facilities, security benefits and more. The actual salary she gets is not transparent yet. Noami Osaka leads the top ten female athletes' richest list with a net worth of $57 million. To be noted, Female gymnasts make more money than males by $5100 per as per the sources.

She is independent and lives a quality life from earning her profession as popular players collaborate with various companies and brands. As a result, linking with them, she adds a handsome amount of money to his net worth.

The 21 world team member Konnor McClain is available on various social media. With her family name, we can find her media platforms. Among the various social media outlets, Konnor prefers Instagram. She goes by the username @konnormcclain_ on Instagram, and it is featured with a blue tick, insisting it's a verified account. She quite often comes live on her Instagram and interacts with her fans. On her Instagram handle, she has a huge following of 46.9K.

Via Instagram, she speeds up to date his fans on her daily life events, gymnastics events, and news. Her strong presence on Instagram also leads her to earn some money from the brand and sponsors.

Konnor McClain, the 2019 city of Jesolo Trophy champion, peaks her height a 4 ft 9 inches or 1.52m and weighs around 50Kg. The gymnast is of light brown complexion and has curly hair. Further, she has a well-maintained body.