Kody Clemens is an American professional baseball who is currently playing for the Detroit Tigers organization. The Detroit Tigers picked him with the 79th overall pick in the 2018 Major League Baseball Draft.

Born on 15th May 1996, Clemens finished his collegiate career at The University of Texas at Austin for the Texas Longhorns.

As of 2020, Kody Clemens has an estimated net worth of $0.5 million. After being picked by the Detroit Tigers in the third round of the 2018 MLB Draft, Clemens signed a contract with an estimated $600,000 signing bonus.

Soon he went on to play for the different minor league team and is now promoted to the Erie SeaWolves. According to the source, starting pay for minor leaguers is between $1,100 and $2,150 a month, and only during the season, which can be as short as three months.

Furthermore, MLB is increasing the minimum salary for players in the minor leagues starting with the 2021 season. Rookie and short-season salaries will increase from $290 to $400 per week; players in A ball will receive an increased weekly wage from $290 to $500. In Double-A, players will earn $600 per week, up from $350, and Triple-A players will go from making $502 per week to $700.

When it comes to personal life, the Detroit Tigers organization's second baseman is a quite confidential person. Whether Clemens is single or dating is still the subject of curiosity. As there is no confirmation about his relationship or girlfriend, the hunk is possibly single. 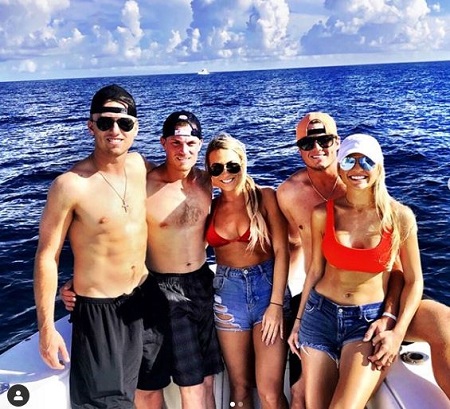 The twenty-three years old is active on Instagram with 13.2K followers. His post on the page is mostly from his profession and some with his friends and family.

Kody Clemens was born to parents: mother, Debra Lynn Godfrey and father, Roger Clemens, a former baseball pitcher who played 24 seasons in the MLB. He grew up alongside his three brothers: Koby, Kory and Kacy. Among the three. Koby Clemens is a retired baseball player who is the current coach for the Houston Astros farm system.

Clemens enrolled at Memorial High School where he played for the school's baseball team and was named first-team all-district selection in 2013 and was a Perfect Game Honorable Mention for high school in 2013 and 2014. After graduation, he attended the University of Texas at Austin and played for the college team.

In the 2018 Major League Baseball draft, the Detroit Tigers selected Clemens with the 79th overall pick in the 3rd round (Casey Mize was the 1st round pick by the team). He made his professional debut with the West Michigan Whitecaps of the Class A Midwest League.

Later, Clemens was promoted to the Lakeland Flying Tigers of the Class A-Advanced Florida State League in August. He started the 2019 season with Lakeland before being promoted to the Erie SeaWolves at the end of the season.