The New England Patriots' quarterback Tom Brady needs no introduction as he possibly is the current face of the NFL, but guess what, his better half exceeded him in net worth!

Gisele Caroline Bündchen AKA Gisele Bündchen isn't just Brady’s wife, she is a well known Brazilian supermodel and United Nations Environment Programme's Goodwill Ambassador. Further, if you double Tom Brady's net-worth it reaches somewhere around the supermodel mom's worth. Let's get into details:

Listed as the 89th Most Powerful Woman in the World and the 16th richest woman in the modeling industry by Forbes, NFL star Tom Brady 's wife Gisele Bündchen is also popular supermodel earning over $30 million per year.

The former Victoria's Secret model has been the face of many high profiled fashion houses from over 12 years and has many contracts that yield her from $15 million to $45 million per annum. If that isn't surprising enough then here is an estimation of her current net worth:

Gisele Bündchen as of 2019, has an estimated net worth of over $360 million! Her deals with brands like Red Hot Fantasy Bra, Louis Vuitton, H&M, Balenciaga, Chanel, and Carolina Herrera are only a few names that make it on the list!

Her Selittoes shoe brand Ipanema Gisele Bündchen is like the pair of Jordans for girls as the shoe generated over £152 million in 2010 and was sold over 250 million pairs. So, you can calculate how much she must have made from her brand.

Now let's take a look at Tom Brady's Earnings and net worth here:

We all agree that Tom Brady is undoubtedly the first-ballot Hall of Famer to be and as of 2019, he has an estimated net worth of $180 million, and it's half of what his wife is worth. Despite the football star as per Foreb is the world's fifth most paid football star, he is only able to make around $8 million in endorsements from brands like Under Armour and UGG Boots. 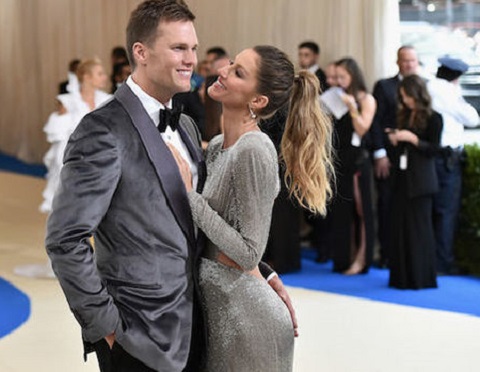 If money could define relationships, rich families won't ever be breaking up! Tom after his divorce with his former wife and his first child's mother Bridget Moynahan, as per many is the luckiest guy who has Gisele Bundchen by her side. The Duo is one of the world's strongest couples.

I got your back!

As Gisele Battled has admitted that she had Panic Attacks and suicidal tendencies but Tom stood by her side just like she proudly kissed him after her husband's victory.

More than that, she loves Brady's first child from his former marriage as much as she loves her own children.

Keep up for more!