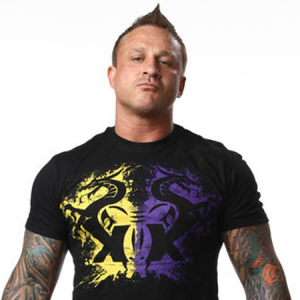 Kid Kash was born on July 31, 1969, in Waynesboro, Virginia, the USA as David Tyler Cash. His father, David Kash was a professional boxer and he began his training at the age of seven. He got his first lesson of Martial Arts from his father. He then worked in Japan to achieve his dream as a professional fighter.

Kash then met up with an American wrestler, Rocky Morton during his travel who helped him to continue his training. Kid Kash belongs to white ethnicity and holds an American nationality.

Kid Kash worked as a welder before beginning his career in wrestling. At the age of 20, Kash started wrestling in 1989. His first mainstream exposure came in 1996 November with Extreme Championship Wrestling (ECW). He then started wrestling as David Tyler Morton Jericho. He transferred to Philadelphia and became a friend with New Jack and Rob Van Dam and Dam first introduced him to Paul Heyman.

Later, Kash left the ECW and signed with the World Championship Wrestling on March 21, 2001. After five days, he was purchased by the World Wrestling Federation(WWF). He then re-emerged in TNA Wrestling as a member of the X-Division. Kash has been honored with TNA X Division Championship from Sonny Siaki on February 12, 2003.

After the end of his contract, Kid Kash was released on April 20, 2005, and then signed with WWE. He made his first WWE pay-per-view debut on December 18 at Armageddon. He played the match against Juventud to win Cruiserweight Champion. Later, he lost the Cruiserweight title to Gregory Helms.

Kid Kash again returned to TNA on August 8, 2010, and made his one-night return, losing to Austin Aries in a three-way first round match for a TNA deal. He officially revealed that he had re-signed with TNA and made his return on August 11.

Kid Kash retired from the world of wrestling on December 19, 2015, after his final match against Chase Owens.

Kash joined the Twitter in April 2011 and currently, he has over 17.7k followers. He often posts the pictures related to wrestling via Twitter. He has shared the picture of a famous personality like Bobby Lashley, James Storm, Crazzy Steve, Samuel Shaw and etc.

While Kid Kash was a wrestler, Kash received $62,000 as an annual salary, however, his current he is not engaged anywhere right now. His net worth is estimated to be $500,000. He often visits numerous places and often shares the snaps of a beautiful destination.