Khem Birch is a Canadian professional basketball player who plays in the National Basketball Association (NBA). As of 2018, Khem Birch currently plays for the Orlando Magic as their Power forward. Khem Birch has played for other teams like Sioux Falls Skyforce, Usak Sportif, Olympiacos.

As of 2018, Khem Birch reportedly earns around $1,378,242 as his yearly salary from Orlando Magic. Further, Khem Birch has an estimated net worth of over $9 million.

Khem Birch was born on September 28 in 1992. His father's name is Dervincent Birch and mother's name is Wendy Sparks. As per his nationality, he is Canadian. Further, his star sign is Libra. He grew up along with his three brothers, Dhandre, Kalum, and Mason. 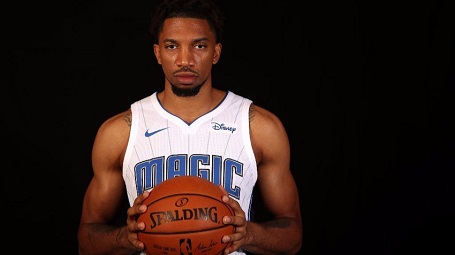 After completing high school, Khem Birch enrolled at the University of Pittsburgh and played for the Pittsburgh Panthers.

As a junior Khem Birch averaged 10.2 rebounds per game which was second highest in the Mountain West Conference.

The Professional Career of Khem Birch

Khem Birch is a professional basketball player. Currently, he plays for Orlando Magic as a Power forward. He signed a contract with the Orlando Magic on July 27, 2017.

Khem Birch has a simple happy family with father, mother and three brothers. He has a very good relationship with his parents and brother's and is also proud of him in is work.

As for his relationship with girls, he is currently single. He is not involved in any kind of romantic scene. There are no rumors of Khem Birch being in any kind of affairs. He also doesn't have a wife nor a kid.

This 26 years old basketball player is busy making career and making his name on the big screen.

Other than being a famous NBA star, Khem Birch is pretty famous in social media. Khem Birch has 9,074 followers on  Instagram and 5,006 on Twitter.

Here are some facts of NBA player Khem Birch.