Kevin Romone White Jr. simply known as Kevin White is an American football wide receiver who is currently signed to the San Francisco 49ers of the National Football League (NFL). He finished his collegiate career at West Virginia and was picked by the Chicago Bears in the first round of the 2015 NFL Draft. He has also been a member of the Arizona Cardinals.

Plainfield, New Jersey native, Kevin White was born on 25th June 1992, under the star sign Cancer. As per nationality, the twenty-eight years old is an American who came from the Afro-American ethnic background. Regarding his physique, he stands 6 ft 3 in (1.91 m) tall and weighs 216 lb (98 kg).

How Much Is Kevin White's Net Worth? Contract & Salary 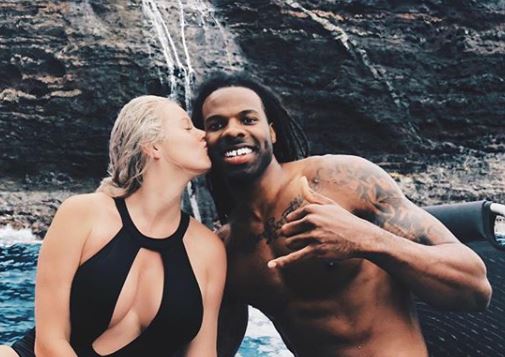 Roxy has shared several pictures with White back in 2018 but has now stopped sharing pictures with him. Similarly, Kevin has deleted all the post with Roxy. Many assumed the two are not together anymore but none of them has confirmed their break up rumors.

Kevin was born to Kevin White Sr. and Tammy White. He has two younger brothers, Ka'Raun and Kyzir, who both played football at West Virginia. Kyzir currently plays for the Los Angeles Chargers as a linebacker.

He enrolled at Emmaus High School where he played football for the high school which competes in the East Penn Conference. Upon graduating high school, he attended Lackawanna College for two seasons before attending West Virginia University.

the Chicago Bears picked White with the seventh overall draft pick in the 2015 NFL Draft. White did not play a single game during his rookie season of 2015. On 15th March 2019, he signed a one-year contract with the Arizona Cardinals. That same year on 21 August, he was released by the team as part of training camp roster trims and a lingering hamstring injury.