Kevin Natividad is an American Mixed Martial Artist who currently competes in the bantamweight division of the Ultimate Fighting Championship. He fought at Legacy Fighting Alliance previously and recently signed with the UFC where he hasn't yet fought.

The Bantamweight fighter is scheduled to make his UFC debut at UFC Fight Night 176. How much will he earn as a salary from the promotion? Is he Married? Who is his Fiance? Check the bio to know about him in detail.

Kevin recently signed wit the UFC but hasn't yet made his debut at the promotion. He will now earn more money than previously and will be able to generate huge earnings from the promotion. He is expected to earn around $25,000 in his UFC debut fight against Brian Kelleher on September 5.

Earlier, he fought at Legacy fighting Alliance where he fought four matches and earned several thousand dollars. Moreover, he also competed at several other promotions where he earned some money.

Natividad started his amateur MMA career with Destiny MMA in 2011 and fought until 2015 winning all 6 fights. He started his professional career with WFF - World Fighting Federation 32 in November 2016. After that,l he also fought at Combate Americas and Iron Boy Promotions and signed with Legacy Fighting Alliance in 2017.

Kevin lost one bout and won four at the promotion and signed with the UFC in 2020. He is scheduled to fight Brian Kelleher at UFC Fight Night 176 on September 6, in Las Vegas,

Kevin Natividad is unmarried but is engaged to his girlfriend turned fiance whose name hasn't been revealed. She is active on Instagram with the handle @i.am.lex_. The couple is reported to be together for a couple of years and is planning to get married soon. 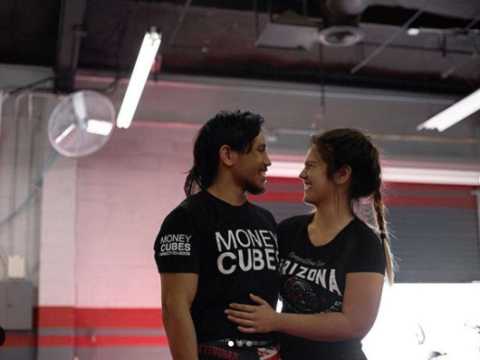 The MMA fighter hasn't revealed any details about his wife. The couple probably is from the same place and might have known each other for quite a long time. His fiance also supports him in his training and also trains with him for fitness.