Kevin Krawietz is a professional German tennis player who is a doubles specialist. He reached his career-high doubles ranking of world No.7 in November 2019. Moreover, he became a Grand Slam following his victory over the 2019 and 2020 French Open doubles titles, partnering with Andreas Mies.

Coburg, Germany native, Kevin Krawietz was born on 24th January 1992, under the star sign Aquarius. The twenty-eight years old is Germany by nationality.

How Much Is Kevin Krawietz's Net Worth In 2020?

Engaged to his Girlfriend

Kevin is in a relationship with his girlfriend, Judit Csonka for a long time. In September 2020, he proposed a wedding to his partner and manager Judit Csonka - Kevin unexpectedly knelt with a ring in his hand at a rest stop in Austria in front of his amazed Girlfriend down. 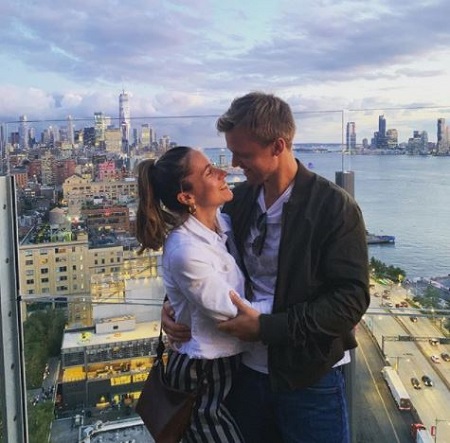 Unlike other wags, Judit stays out of the spotlight. Additionally, she has set her Instagram account private. On the contrary, Kevin often post romantic pictures with his soon to be wife, Judit.

Born and raised in German, Krawietz is yet to talk openly about his parents, childhood, and siblings. Additionally, there is less to no information regarding his academic background.

In 2009, Kevin made his ATP debut as a wildcard at the German Open, where he lost to Jan Hemych in round one. The following year, he received a wildcard for the BMW Open in Munich. He lost to Tomas Berdych in the first round. From 2011 to 2017, he played mainly on the ITF Circuit and the ATP Challenger Tour.

In 2018, Kevin reached the third round at the Wimbledon Championships in doubles with partner Andreas Mies. However, the duo lost to the later champions, Mike Bryan and Jack Sock.

Partnering with Mies, Kevin won his first doubles title on the ATP Tour at the New York Open. In 2020, the duo successfully defended their French Open title.