Kevin Kisner is a well-known American professional golf player. He is currently playing in the PGA Tour. Kevin made his professional debut in 2006 and started his career in the Web.com Tour and European Tour. Kisner has won nine major titles, including three PGA tours, one European Tour, Two Korn Ferry Tour, and four others.

Kevin Kisner was born Kevin James Kisner on February 15, 1984, in Aiken, South Carolina. He is among the four children born to Christy Kisner and her husband, Steve Kisner. Kisner graduated from South Aiken High School and enrolled at the University of Georgia. Kevin stands five feet and ten inches tall and weighs 75 kg.

Kevin Kisner has an estimated net worth of more than $20 Million. He is ranked at No.68 in the all-time money List in the PGA events, right behind Brian Gay and Tim Clark. Kevin has earned most of his net worth through his career in the PGA. He has already made $1,506,077 in the ongoing season of 2020/21 from twenty-two PGA events. 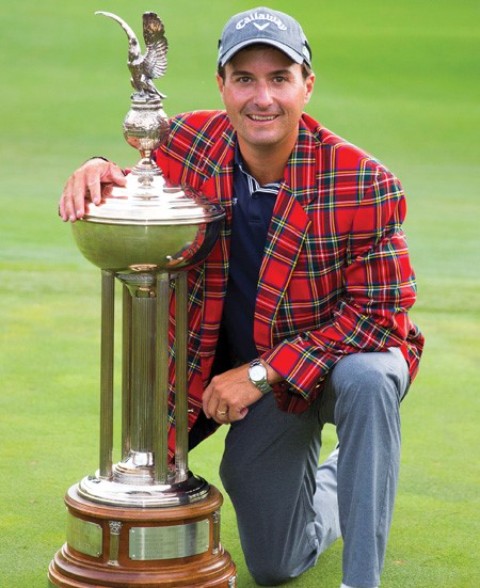 Yes, You read that right, Kevin, the proud father of two children. Kisner married his longtime girlfriend, Brittany Dejarnett, in 2012 at a private wedding ceremony. They had been dating each other for some time before their marriage. Shortly after the wedding, the duo welcomed two children, a daughter, Kathleen, and a son, Henry James. The family of four is living a happy married life.

Kevin started playing golf from his High School days. He was a 2005 NCAA Division I Championship team member and Chris Kirk, Richard Scott, and Brendon Todd. Kisner turned professional in 2006 and played on the mini-tours (NGA Hooters Tour and Tarheel Tour) from 2007 to 2009. The player made his PGA debut in 2011 and has been with it to date. In November 2015, Kevin won his first PGA Tour victory by winning the RSM Classic in his 109th PGA Tour.

In 2017, Kisner won the Dean & DeLuca Invitational, his second PGA title, and won his last PGA title at the 2019 WGC-Dell Technologies Match Play. In 2018, Kevin finished T2 in the Open Championship. He has appeared in more than three professional events and will be playing in more in the future.