Kevin Durant Injury Update: Will he Return for Game 6 and 7 of NBA Finals? 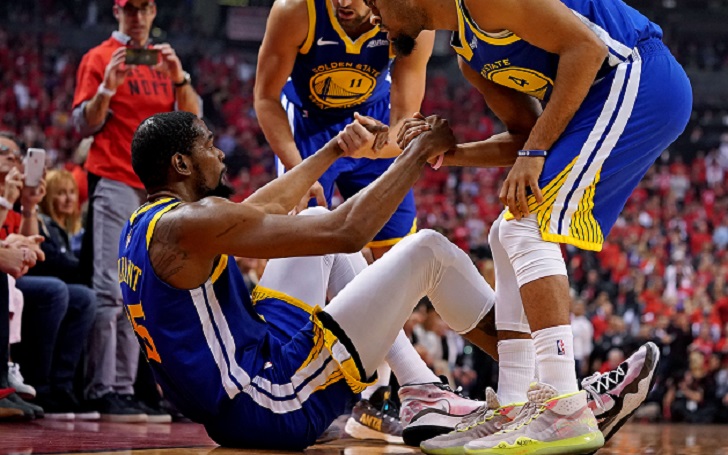 Golden State Warriors were not in the position to celebrate the late win against Toronto Raptors on Monday Night that came after 3-1 down. They suffered a massive loss that could end their dream of defending the title.

After a month sidelined due to a calf injury, Kevin Durant returned to the action against Raptors for the Game 5 of the NBA Finals just to play 1 and a half quarter and was again forced to leave the court suffering an apparent right Achilles injury on Monday night.

Ahh no, KD went down pic.twitter.com/thJCbDomrI

The reigning Finals MVP had to remain out of the court after he injured his calf against the Houston Rockets in the Western Conference semifinals. He scored 11 points in his first quarter including three from the downtown but had to move to the locker room after injuring his Achilles.

In the halftime, the team announced that Durant would not play the rest of the game time. Warriors president of basketball operations Bob Myers addressed the reporter and said that Durant would get an MRI on Tuesday and also revealed that he had sustained an Achilles injury. The full injury report is yet to be released.

“It’s an Achilles injury. I don’t know the extent of it.”

"It's an Achilles injury. I don't know the extent of it. He'll have an MRI tomorrow ... I don't believe there's anybody to blame. But I understand this world. And if you have to, you can blame me. I run our basketball operations department."

Myers said while fighting off tears.

The third quarter incident made fans doubt if Durant would return for the Game 6 and 7 of the NBA Finals. He was spotted leaving the Warriors' locker room on crutches which made people think that this might be his last match on Warriors t-shirt.

Despite his injury, Durant did not forget to support his teammates and congratulate for the victory.

"I'm hurting deep in the soul right now I can't lie. But seeing my brother get this win was like taking a shot of tequila, I got a new life. #dubs"

Durant wrote on his social media.

We will let you know about his injury details after the MRI report is out.