Kevin Calabro is the longtime voice of the former Seattle SuperSonics NBA franchise. The  Seattle, Washington-based sportscaster has primarily called NBA basketball but has also announced collegiate football, basketball, and MLS Soccer. For the 2021-22 season, he rejoined the Portland Trail Blazers as the Play-By-Play Voice after previously serving for the team from 2016-20.

Indiana native, Kevin Calabro was born on 27th June 1956, under the star sign Cancer. The sixty-five years old holds an American nationality and is of white ethnic background.

While still in  Ben Davis High School in Indianapolis, Indiana, Calabro called high school basketball games in Indiana on WBDG. After graduation in 1974, he enrolled at Butler University. There he called Butler Bulldog basketball for four years.

Further, he broadcast games for the Indianapolis Checkers, as well as at Purdue University in the Central Hockey League. Also, he called basketball games for the University of Missouri.
Calabro began his professional journey in the 1983–84 season as the play-by-play announcer for the Kansas City Kings. 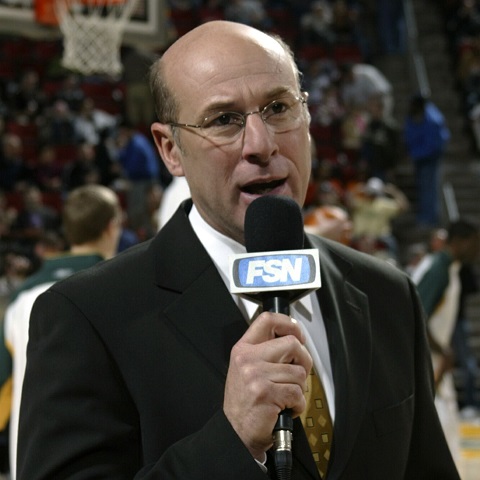 Calabro was the lead play-by-play personality for the Seattle Sounders FC of MLS in its first year.

He has served on the national level with TNT, TBS, ESPN Radio, and NBA TV. Moreover, he also voiceover to several Microsoft games, including NBA Inside Drive, NBA Full Court Press, and NFL Fever,

Most recently, he lent his voice for the Sony PlayStation NBA game franchise.
Calabro and his wife, Sue, have been married for 38 years and live in Seattle with their four children and daughter-in-law nearby.

Calabro and his wife, Sue, celebrated 39 years of marriage as of 2021. The couple shares four children together. The family live in Seattle with their four children and daughter-in-law nearby.

In 2020, he stepped down from the Portland Trail Blazers as the television play-by-play voice  to be with his family in order to avoid exposure to COVID-19.

He is a pet lover, Kevin said, "We love dogs and cats equally, but they are fifferent, Our dog of 15 years, Buck, passed a couple of years ago. Broke our hearts."

How Much Is Kelvin Calabro's Net Worth In 2021?

Best known as the 21-year veteran announcer of the Seattle SuperSonics, Kevin Calabro has an estimated net worth of $2 million. Currenly, he has an annual salary of $0.2 million.

The Calabro family is living a lavish lifestyle but has maintained it lowkey. Calabro and his wife Sue owns a home on Lake Chelan’s southshore since 2006.