Kenyon Green is a rising American football player. He is currently playing for the Southeastern Conference for Texas A&M University. Green plays as an Offensive Tackle for his team. Kenyon was named into the Consensus All-American twice and First-team All-SEC.

Kenyon Green was born on March 15, 2001, in Humble, Texas. He is the son of Henry Green and his wife, Shalonda Green. Kenyon has a sister, Kamirah. Green rose to fame through his career and has not shared much about his parents and early life. His mother played volleyball at UCLA. Kenyon graduated from  Atascocita High School and enrolled at Texas A&M University. Green stands six feet and four inches tall and weighs 147 kg.

Kenyon started playing American football in the early days. The multi-talented sports personality played numerous sports in High School and committed to American football. He was named the Houston area UIL Offensive Player of the Year by the Houston Touchdown Club and helped his High School team averaging over 460 yards of offense per game and the third round of the playoff. Green committed to play for LSU in his sophomore year but later enrolled at Texas A&M. 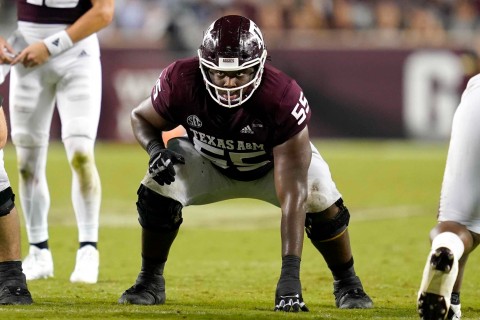 Kenyon was named Texas A&M's starting right guard during his freshman season. The player started in all thirteen games and Helped Aggie's tally over 600 yards of offense in the win over Lamar. At the end of the season, He earned the  Offensive Top Newcomer Award at the annual team banquet. Kenyon played in all ten games in his sophomore year and was named a finalist for the Joe Moore Award.

Kenyon moved to offensive tackle for the junior year and started in all twelve games. He served as the team captain for the whole season. Green started at right tackle and helped A&M roll up 595 yards of total offense in the season-opening win over Kent State. Green earned the Offensive MVP Award and Leadership Awards and the Academic Award among juniors at the annual team banquet.

After completing his junior year, Kenyon has decided to forgo his senior year and started preparing for the 2022 NFL draft. He is ranked among the highest waiting player for the upcoming draft.

Who is Kenyon Green Dating? Know About His Girlfriend and Relationship Status

Kenyon likes to keep his personal life away from the media. He has not shared a word about his relationship status in public. The player is believed to be single as of early 2022. Green must be focused on his career and waiting for the right time to start his life.

Kenyon has yet to start his professional career, and NCAA does not allow its players to receive any form of payment to represent their universities. Green will be making from his contract in the upcoming NFL draft. The salary of a first-round pick is more than $5 Million.