Keno Davis is a rising American college basketball. He has been working as the head coach of Men's Basketball team at Central Michigan University. Keno started his career as an assistant coach for Iowa State University in 1991 and joined Drake University as their head coach in 2007. Davis has won numerous awards and accolades to his name as a head coach.

Keno Davis was born on March 10, 1972, in Easton, Pennsylvania. He is the only child born to Tom Davis and his wife, Shari Davis. His father was also a college basketball head coach for the Drake University. Keno enrolled at the University of Iowa after graduating from High School.

Keno Davis has an estimated net worth of more than $1 Million. Davis has an annual salary of $319,923 as per his contract. He signed a five years contract worth $1.5 Million in 2019. He will make $100,000 as a bonus per season for television, radio, and promotional appearances, just as he did with his prior contract. 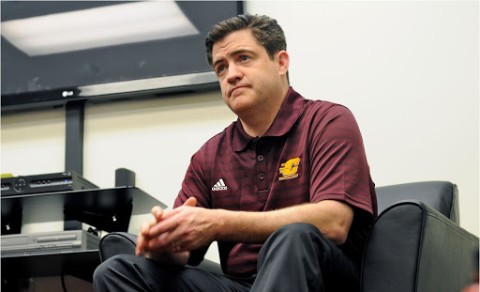 Davis worked for Central Michigan with a base salary of $300,000 as per his old contract. His wage was raised by $19,000 in 2019. His contracts include several other bonus amounts, like an additional $75,000 if his team wins the Championship.

Know About Keno Davis Married Life and His Children

Central Michigan Head Coach Keno is very much private about his personal life. Unlike other head coaches, Davis does not show much presence on social media. As per sources, Keno is a married man living a happy married life. Keno got married to his longtime girlfriend, Kristi. The duo had a private wedding ceremony at Keno's hometown, Easton.

Shortly after the marriage, Keno and Kristo welcomed two children, a daughter Mara and a son, Brady. The family of four is living a happy life.

After graduating from the University of Iowa, Davis started working as an assistant coach at the alma mater in 1991. After working with the team for five seasons, He moved to Southern Indiana in 1995 for the same position. Keno did not have a good time with the team and then moved to Southeast Missouri State in 1997 and worked there until 2003.

In 2003, Davis started working as an assistant coach under his father's leadership at Drake University. His father resigned, and Drake University hired him as their head coach. He won four different awards to his name when he led his team in the MVC regular-season final and MVC Tournament.

In 2009, Providence College hired Keno as their head coach. He had a bad time with the team and moved to Central Michigan and their head coach in 2012. In 2015, Davis led his team to MAC regular-season championship and MAC West Divison regular season Championship. He was named MAC Coach of the Year and Skip Prosser Man of the Year. The head coach has some hard time in the league as they finished eleventh in the 2020/21 season.