Kendall Jenner is one of the hottest celebrities in LA who so far has who has dated several strong sportsmen. Recently, Jenner was linked in an affair with the 76ers star Ben Simmons but looks like the long-distance partnership has ended. There were talks that Ben wanted to move to Los Angeles, which was clearly not feasible due to her legal agreement to the Sixers, and maybe that's why she apparently cheated him a few times.

While both split shortly before, Jenner seems to have progressed much farther; Now to an LA-based NBA star. Jenner was caught on a yacht in the city of Malibu, California, on July 4th with Lakers star Kyle Kuzma.

Jenner was caught on a yacht in Malibu, California with Lakers' player Kyle Kuzma enjoying on July Fourth. News and the pictures were published on Jenner's Instagram Live Story where she appeared extremely happy alongside each other on the independence day. 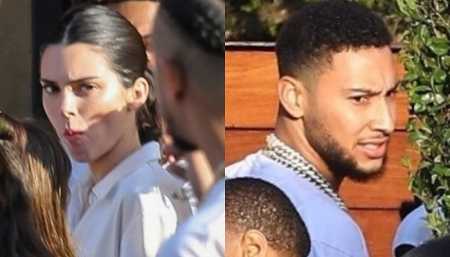 CAPTION: Kendall Jenner moving on after her split from Ben Simmo SOURCE: E-Entertainment

At the same night she and her ex-boyfriend Ben reportedly crossed path as the reality star later went to Booty Bellows party at Nobu in Malibu, where her ex Ben was present in between many celebrities.

"Kendall arrived and went straight to Gigi and Bella's table to hang out with them. She did see Ben and they did have a short run in but they didn't talk at all."

Ben and Kendall are officially over with their 1-year long relationship in May sighting their busy schedules.