Ken Rosenthal is an American sportswriter and reporter who currently works for the Fox Major League Baseball and in-studio reporter for MLB Network. Additionally, he is a senior baseball writer for The Athletic since August 2017. Moreover, he is a Sports Emmy Award winner for his outstanding work in the Fox Sports and MLB Network.

Although the details about his net worth are not in the media, he has an estimated net worth over $3 million. Also, Ken is expected to earn around $150,000 as a salary, working for two networks. Besides, he is a married man, and he is married to his beautiful wife, Lisa Rosenthal.

Ken Rosenthal Earnings; How much is his Net Worth?

As of 2019, Ken has an estimated net worth over $3 million which is entirely generated from his professional career. As per the reports, his salary is assumed to be around $150,000. However, the mentioned figure is just an estimation, and we have no idea about the exact figure regarding his net worth and salary.

Moreover, he currently works for two networks, ESPN and MLB network. In particular, the average salary reported by the ESPN broadcaster is between $18,824 and $75,754 per year while the MLB network is known for paying a salary in between $65,562 to $71,320. So with all the references and assumptions, we concluded that Ken has a decent fortune collected from his professional career.

Moreover, the details about Ken's valuable assets like cars and house are not in the media yet. However, the personality having such huge net worth and salary is obvious to have an expensive car and luxurious house. Well, we will undoubtedly come up with detailed information. Make sure you visit us frequently until we come back with additional information.

Is Ken Rosenthal Married? Know about his Personal Life

Yes, Ken belongs to the married club, and currently, he is enjoying a happy marital relationship with his wife, Lisa Rosenthal. Although there is speculation that he is gay, he is a starting man who has a beautiful family. Moreover, Ken exchanged his marital vows with his wife on 1990. Apart from the date of their wedding, the information about the duo's relationship history is still undercover.

Besides, the couple is a parent of 3 adorable children, but the details about them are still not revealed. One of their daughters, Sarah, had to undergo surgery for scoliosis in late June 2011. As per Ken's statement, Sarah had inherited the disease from him as he too had to go through the surgery when he was 17 years old. 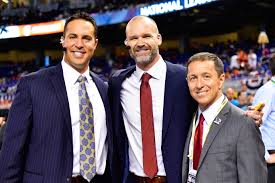 Ken Rosenthal with his colleague's SOURCE: The Boston Globe

As a result, Ken is actively involved to aware people about Scoliosis and its treatment. Moreover, he is also engaged in social services for issues like cancer. He was also the part of  'The Bowtie Cause' which is the foundations that battle cancer. Besides, the details about his body measurements such as height and weight are not in the media yet.

Ken was born on September 19, 1962, in Oyster Bay, New York, the United States but the details about his parents and siblings are not in the media yet. As per Ken's birth, he is an American native and belongs to the ethnic group of white. Further, he was born under the star sign, Virgo.

Ken grew up in Oyster Bay, New York where he attended Oyster Bay High School. He first began to work professionally in the media world in 1984 at the York Daily Record.

As of 2019, Ken currently works for the ESPN as well as MLB network. He works as a sports reporter as well as the writer for both the networks. Additionally, he is a senior baseball writer for The Athletic since August 2017.

Moreover, he is a Sports Emmy Award winner for his outstanding work in the Fox Sports and MLB Network. Previously, he also worked for the Fox network and spent five years at The Sporting News before joining Fox. Moreover, he has also contributed to Sports Illustrated magzines from 1987 to 2000.