Ken Hitchcock is a Canadian professional ice hockey coach who currently guides the Edmonton Oilers. In the past, he has worked with teams like Dallas Stars, Philadelphia Flyer, Columbus Blue Jackets and St. Louis Blues as their head coach.

Hitchcock has an impressive record of 823 victories making him the third coach in NHL history with the most wins. He also led the Dallas Stars to the 1999 Stanley Cup victory. As successful as his career is, he also has a successful marriage and is the father of three children.

How Much Is Ken Hitchcock Net Worth In 2019?

Hitchcock's net worth is estimated to be around $4 million which stems from his 28 years long career as a coach in the hockey scene.

Ken Hitchcock is a renowned ice hockey coach. He has set an impressive record which includes the Stanley Cup win of the 1998-99 season and 800 wins as NHL head coach. It is understandable why various teams would be willing to offer him a huge sum to manage their team.

Ken Hitchcock has had a stable relationship. He is a married man happily married to his wife Corina Hitchcock. He married Corina in 2002 and has been together with his wife for 16 years. This shows their strong love for each other and commitment towards their relationship.

Kenneth S. Hitchcock was born on December 17, 1951, in Edmonton, Canada. He used to play hockey while growing up in Canada and later found his calling to motivate players. In his earlier years of coaching, he began by coaching at various local areas of Edmonton.

Before joining the pro-senior leagues as the coach, he became the coach of the Kamloops Blazers of the WHL. He helped the team to four consecutive division titles and two league titles in the 1985-96 and 1989-90 season. In 1990 he was named the WHL Coach of the YEar and the top coach in Canadian major junior hockey.

Ken Hitchcock left the WHL in 1990 and spent three seasons with the Philadelphia Flyers as an assistant coach. He went to the Dallas Stars' for the 1993-94 season as the assistant coach where he was offered the head coaching position on January 8, 1996.

Hitchcock refined the team to have an impressive season and team-best record of 51-19-12 in the 1998-99 season. Under his guidance, the team won the Stanley Cup during the playoffs as well. He was fired by the Dallas after the 2000-01 season.

His old team, the Philadelphia Flyers picked him up as their new head coach replacing Bill Barber. The Flyers became more disciplined and focused under his helm and reached the Conference Finals in the second season of his coach, losing to the Tampa Bay Lightning.

The Dallas Stars gave the position of head coach to Hitchcock for the second time in 2017. In December of 2018, he earned is the 800th win as the NHL head coach and announced of his retirement in April of 2018.

However, he came out of retirement on November 20, 2018, to assume the position of head coach for the Edmonton Oilers in replacement to Todd McLellan. 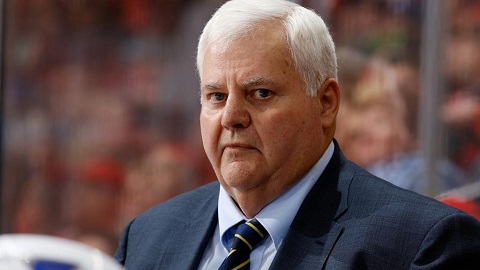 The club hired Ken Hitchcock and replaced Todd Mclellan, and a day after the whole incident, on 21st November 2018, Hitchcock led Oilers' team was able to register their first win over San Jose Sharks after five losses in 2018's season.