Kelli L. Stavast is an American sportscaster for NBC Sports; she is known for her pit reporting for NASCAR, including the Cup and Xfinity Series and IndyCar Series. Stavast is popular for her several reporting works in her motorsports career. Stavast was well admired for her diving report at the 2016 Summer Olympics in Rio de Janeiro and as a pit reporter for the NCB's returning NASCAR coverage.

Kelli Stavast was born on January 30th, 1980, in Colorado and was raised in Denver, Colorado. where she grew up with her sister Amanda., She attended Chapman University and graduated with a journalism degree. She currently lives in Las Vegas, United States. Stavast has not opened about her parents to date.

Kelli Stavast's Married Life; Who is his Wife?

Kelli is a married woman married to Gavin Kelli. Following the same professional, the couple exchanged wedding vows in 2018. Gavin is also an American sportscaster who works for the NBC Sports, NASCAR, and IndyCar Series.

In the year 2016, On Stavast's birthday, they got engaged on a trip to Cabo San Lucas, and it only had been 15 months since they had dated. The American sportscaster posted on Instagram 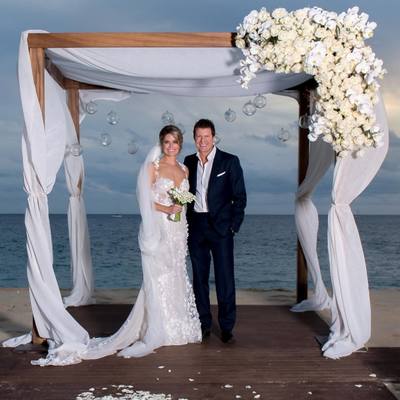 Kelli Stavast with her husband, Gavin Kelly, at their wedding. SOURCE: [email protected]

"Closed out 2018 in the best way possible...finally making good on my commitment to marry this incredible man @gavinernstone . Can’t wait to see what the next year holds for us."

Kelli added in one of the conversations about the proposal, saying

“Gavin  had tears in his eyes. He simply asked, ‘Baby, will you marry me?'” and as is to be expected, she then started crying! “I was quickly in tears myself. My first response was, ‘Are you serious?’ He said ‘yes’ and then I said, ‘Of course!’”

The couple had been married for 4 years and lived happily, as seen from her Instagram posts; they are often seen together during reporting. Stavast and Gavin are not parents to date, and there might be surprises for her fans in the coming years.

The couple owns two dogs named Coco Pub and Molly Sausages; they are seen with their dogs in Stavast's Instagram posts. The American sportscaster loves going out to beaches during their vacations and holidays; moreover, they spend most of their time reporting sports together.

Kelli Stavast's Job, Salary, and Net worth in 2022

The American sportscaster was passionate about sports from a young age and later started working on TV as a sports anchor for KKCO. Stavast was interested in reporting, so; she shifted her career as a TV reporter a later.

Talking about her job, she has been seen reporting in numerous motorsports events, including NASCAR GRAND-AM, Baja 1000, Lucus Oil Off Road Racing Series, and Stadium Super Trucks. We can expect she has collected some good fortunes to date. 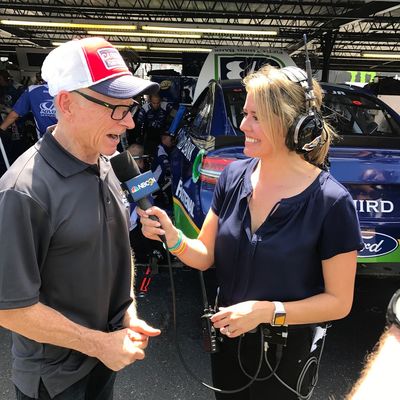 As per some sources, the average salary for a Sports journalist is $41,698 per year. Stavast has been working in these fields for a long time and might have secured some good earnings to date. She works for the renowned NBC Sports so, her salary might be more than $60,000 per year.

In general, as a sportscaster, Stavast is believed to have an estimated networth of $1.4 million approximately. Her works in TV shows, too, might also boost her networth. She has got a lot of journeys ahead of her in the coming years. She has a lot of journeys to go for her as she is one of the loved sportscasters.

On October 2, 2021, during an interview with Brandon Brown, the NASCAR Champion crowds in the stadium chanted against Joe Biden for the Democrats and Biden government. Stavast interpreted the chant as "Let's go, Brandon." NASCAR deleted the interview after realizing the real chants of crowds.

The interview led Stavast to be cornered as memes and trolls; she has not ever talked about the incident since then.

Kelli was raised in Denver, where she grew up with her sister Amanda, a painter. After attending Chapman University, Stavast graduated in 2002 with a broadcast journalism degree. 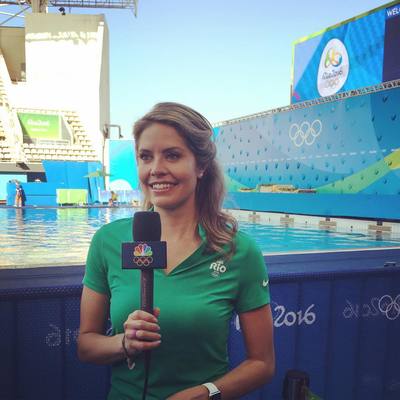 Stavast has contributed to NBC, Speed, and ESPN for motorsports reports; for the past few, she has been seen in the Grand-Am, American Le Mans Series, Stadium Super Truck Series, and Lucas Oil Off Road Racing Series.

She is an active Twitter user who frequently posts about her sportscasting during various events. She has a good number of followers on Twitter, where she tweets about her professional life experience, and her Twitter goes by @KelliStavast.

And on Instagram, she appears by the username kellistavast and has more than 5.2K followers. She posts about her photos on different occasions and her family photos.