Karen Crouse is an American journalist and author. She was the first woman to grace the sports department at the Savannah News-Press, where she began her newspaper career. Since 2005, she began working with New York Times.

Crouse was set to cover the Summer Olympics in Tokyo for The Times in July 2021 but didn’t make the trip. Moreover, the sportswriter also resigned from the newspaper after 16 years of covering swimming, golf, and other sports. Read this full article to know why Crouse quit it.

Crouse started her career at U.S based monthly swimming magazine, Swimming World. Later, she joined the Savannah News-Press, becoming the first woman in its sports department.

After that, she headed to The Palm Beach Post and then the Los Angeles Daily News prior to joining The New York Times in 2005 as a sports reporter. 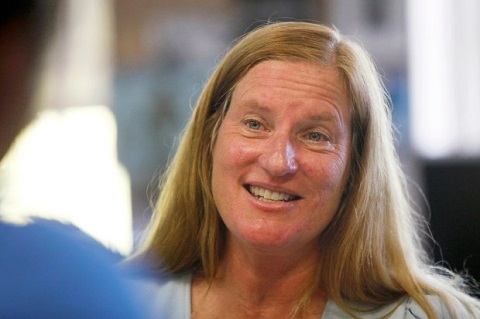 In 2016, she was a finalist at the NSMA Awards or National Sportswriter of the Year.
In 2018, she wrote the book Norwich: One Tiny Vermont Town's Secret to Happiness and Excellence which was published by Simon and Schuster.

In October 2019, she was named international sports correspondent for The Times.
After she failed to disclose her deal to write a book with American swimmer Michael Phelps, she was suspended to cover the Summer Olympics. Her decision of becoming the ghostwriter on a book disrupted the newspaper's conflict of interest policy, hence, she resigned.

Karen Crouse grew up in Santa Clara, California, and swam for the Santa Clara Swim Club, De Anza Swim Club, South Bay Aquatics, and St. Francis High School before heading off to compete for the University of Southern California.

She received a BA in Journalism and Physical Education from the University.

Besides, there is information available regarding her parents, siblings, and childhood.

Karen Crouse is a married woman. Though there is not much information about her marriage and husband, via Twitter she shared her spouse is a cancer survivor.

She wrote, "My husband, a cancer survivor, has 1 leg that swells to 2x its normal size, a residual effect of an against-all-odds win over the Big C. On the golf course yesterday, a stranger called him a "cripple". Strangers routinely stare at his leg, say they're glad not to be him. Where oh."

Named among the top 10 beat reporters in the US by the Associated Press Sports Editors Association, Karen Crouse has made decent torture through her sports journalism career.