Kalif Raymond is an American football player who is currently signed to the Tennessee Titans of the National Football League (NFL) as their No. 14 wide receiver. He finished his collegiate career at Holy Cross. After he was left undrafted in the 2016 NFL draft, he was signed by the Denver Broncos and had a brief stint at New York Jets and New York Giants.

He is ranked 163rd among WRs with a $630K cap hit in 2018 and ranks 120th overall at the position for 2019. Roosters such as Antonio Brown, Mike Evans, and Sammy Watkins are the highest-paid athletes of the team.

Looking at his contract and salaries, Kalif Raymond has an estimated net worth of $1 million as of 2020.

Standing 5 ft 9 in (1.75 m) tall, Kalif Raymond is currently in a relationship with his girlfriend, Julia Baker. The two is dating since 2015. 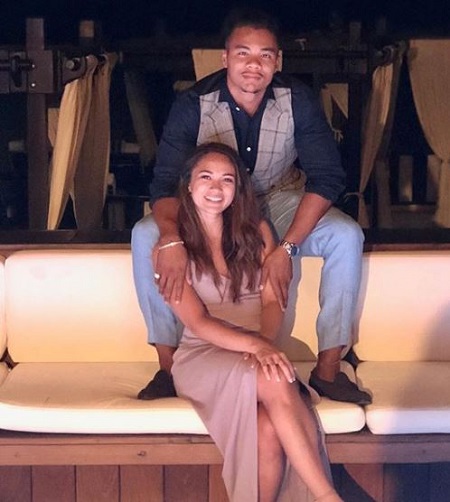 As of now, its been over five years that the couple is together. It seems like they are pretty serious in their relationship and might tie the knot soon. Besides, Julia often appears on Raymond's Instagram, but, has set her Instagram account private.

Kalif was born as one of seven children to parents: Eric Raymond and Kim Ly. His siblings are Mason, Cornelius, Antonio, Kedar, Sydea, Madison, and Erica.

A smallest kid in the neighborhood, but the others allowed him to play because he was faster than any of them. He remembers,  “I was always like the second or third fastest, But I was never even labeled like, ‘the fast guy.’ I was a faster guy, but it wasn’t until right after my freshman year in college that I put on like 15 pounds and started running a lot faster.”

On May 3, 2016, Raymond signed the Denver Broncos as an undrafted free agent. Later, four months, he was released by the club but assigned to the practice squad and was promoted to the active roster on December 2, 2016.

The following year on 2nd September, he was waived by the Broncos. The next day, New York Jets claimed off the waivers. On 26th September 2017, he was released by the Jets.

On December 31, 2018, Raymond signed to a reserve/future contract with the Titans.