Kaitlyn Vincie is an American sports journalist. She is known for the covering NASCAR in Fox Sports network. Moreover, she has previously worked for SPEED Channel Incorporation, Langley Speedway and WTKR- TV. Currently, she is also presenting daily news on the FOX and updating show "NASCAR Race Hub."

Kaitlyn Vincie reportedly earns around $100,000, as her yearly salary from the network, and as of 2019, she has an estimated net worth of over $500,000. she is currently married to her longtime boyfriend Blake Harris and has 1 child with her.

Kaitlyn Vincie was born on December 10, 1987, in Harrisonburg, Virginia, the United States to John Vincie and John Vincie. According to her racial background, she holds an American nationality and belongs to the White ethnic group.

She developed her interest in journalism from her early childhood. She attended Fauquier High School in 2006 for her high school education. Later, she graduated from Christopher Newport University with a Bachelor's degree in Communication Studies.

Vincie wrote a senior thesis on the gender disparity which was focused on woman race car driver Danica Patrick and became interested in the sport after she secured a pit lane pass for the NASCAR All-Star Race. She was inspired by Krista Voda and Wendy Venturini to work in the field of racing.

Kaitlyn Vincie Net worth and Salary

The American sportscaster/anchor Kaitlyn Vincie has an estimated net worth over $500 thousand. As of 2019, the reporter receives an annual salary of $100,000 from her successful reporting career with Fox Sports.

Specifically, Fox Sports Announcer's average salary is $100,369 per year, ranging from $88,895 to $110,430. In addition, before her FOX sports career, she worked for a different network, through which she earned a decent amount of money that certainly helped her collect large net worth.

?Not a bad view. A little dirt Truck racing and a brew. #EldoraSpeedway ?

Kaitlyn started her professional journalism career as a Pit- Reporter, followed by the Langley Speedway NASCAR Video Content Report. She didn't work there for a long time, however, and left after several months. In the following year, she started working in Langley Speedway TV as NASCAR Home Track Pit- Reporter and served there for nearly two years.

Kaitlyn joined FOX Sports back in August 2013 and started working as a NASCAR reporter. She is currently presenting daily news and updating the NASCAR Race Hub for the FOX Sports network.

Kaitlyn, the 30-year-old American sports anchor, is a married woman. She is currently married to her longtime boyfriend turned husband Blake Harris. Further, the duo is blessed with a daughter named Kadence.

The couple has had a good relationship between them since their marriage with no rumors of divorce or separation. 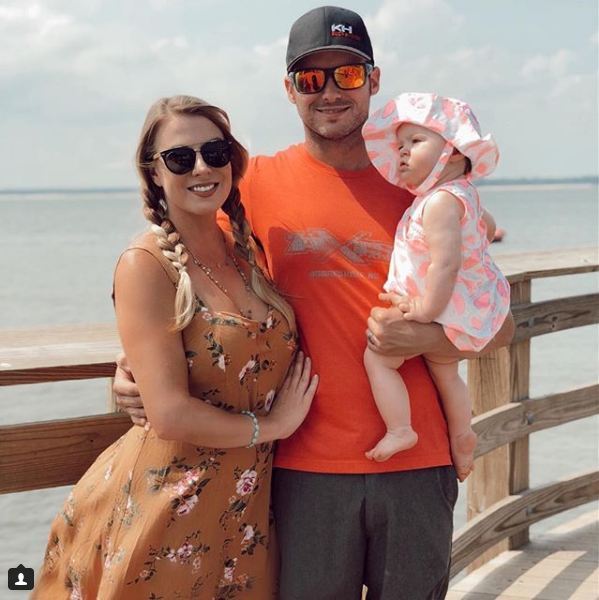 The married couple also frequently appears in the public and media. At the moment, Kaitlyn and Blake are enjoying their married life and live wonderfully together.