French-born Cameroonian footballer Joyskim Dawa is widely famous for his amazing playing skills. Since July 1, 2022, Dawa has been contributing to Liga I club FCSB. Before coming into his current team, Dawa played for other clubs and gained broad experience.

Moreover, Dawa plays for the national football team of Cameroon at the national and international levels. He has played various games while playing for the national team and has also given his best on the field. The national Cameroon team is on the list for FIFA World Cup 2022, so Dawa may also make his world cup debut.

Starting with his football career, Dawa joined US Avranches in 2011. Dawa played with the team until 2014 when he moved to Monaco. After that, Dawa spent his early career there. Moreover, Dawa joined Gil Vicente in 2016, but he didn't make a single game appearance for the team. Later, in 2018, Dawa received an offer to play for Mariupol and made 39 game appearances for the team. Joyskim Dawa in one of his professional games  SOURCE: Instagram @dawajoyskim

Likewise, Dawa played for Valmiera from 2020 to 2021, and with them, he played in 18 professional games and also scored two goals. The following season, Dawa entered Botosani, with whom he appeared in 31 games and netted four goals.

On July 1, 2022, Dawa joined Liga I side FCSB. Talking about his international career, Dawa plays for the national team of Cameroon, and his debut for the senior squad came on October 16, 2018, when he played against Malawi in the Africa Cup of Nations qualifiers.

How Much Is Dawa's Net Worth?

Dawa is a professional footballer, and he makes most of his gains from his football career. Currently, he is playing for FCSB. It is reported that Dawa received a fee of €350Th when he joined the squad. As Dawa also plays for the national team, he might be taking a decent salary. 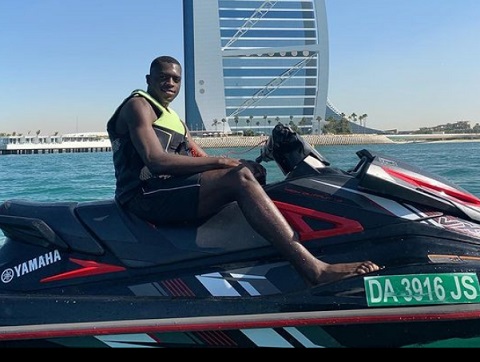 As none of the media outlets have given his income details, we are also unable to mention facts about his salary or wages. According to Transfermrkt, Dawa's market value is €800Th. In the same way, his net worth may be pretty impressive, but the amount still remains unknown.

Who Is Joyskim Dawa Dating?

Dawa's current relationship status appears to be single, as the footballer has not given any peek at his personal life. We can find him active on Instagram as @dawajoyskim, but Dawa has not made a single post about his love life. So, the footballer might be focusing on his rising career rather than searching for a life partner. As his fans and followers are eager to know about his girlfriend, Dawa may give some updates in the future. So, to get revamped his life, we can follow Dawa on Instagram.

Joyskim Dawa was born to his parents in Colombes, France, on April 9, 1996. As said earlier, Dawa is a private guy, due to which his father and mother's information also remains a mystery.

Regarding his body measurement, Dawa is a tall guy whose height is measured at 6 feet 4 inches which is 1.92 m.