Brandon Aiyuk is a rising American football player. He rose to fame after the San Francisco 49ers drafted him with the 25th pick in the first round of the 2020 NFL draft. Brandon plays as a wide receiver and is a return specialist. Aiyuk was named into the First Team All-Pac-12 in 2019.

Brandon Aiyuk was born on March 17, 1998, in Rocklin, California. He did not come from a reputed family so, much information about his early life and his parents is under the radar. Brandon graduated from Robert McQueen High School and enrolled at Arizona State University. Aiyuk stands six feet and weighs 91 kg.

Brandon started playing American football from middle school. He was part of the High School American football team and played as wide receiver, defensive back, and returned backs. At the end of the senior year, Aiyuk was named first-team All-Northern Nevada and honorable mention All-State. He started his collegiate football career with Sierra College. In his freshman year, He caught 29 passes for 573 yards and five touchdowns and was named All-Big 8 Conference.

Aiyuk completed his sophomore year with 2,499 all-purpose yards and 21 touchdowns. For his junior year, Rocklin Native Brandon committed to transfer to Arizona State for the final two years of his NCAA eligibility over offers from Colorado State, Kansas, Tennessee, and Alabama. He finished his junior year with 33 catches for 474 yards and three touchdowns. Aiyuk finished the season with 65 receptions for 1,192 yards and eight touchdowns, returned 14 punts for 226 yards and one touchdown, and 14 kickoffs for 446 yards.

Brandon finished his senior season with 65 receptions for 1,192 yards and eight touchdowns, returned 14 punts for 226 yards and one touchdown, and 14 kickoffs for 446 yards. He listed his name for the 2020 NFL draft, and the San Francisco 49ers drafted him in the first-round 25th pick. Aiyuk played in twelve games and averaged 12.5 points per game.

Who is Brandon Aiyuk Dating? Know About His Girlfriend

Brandon is involved in a romantic relationship with his longtime girlfriend, Rochelle. The love birds have been dating each other for more than three years. Following their posts, it seems like they first met each other while attending the university. In early May 2020, Rochelle shared a photo and opened about expecting a baby shortly. 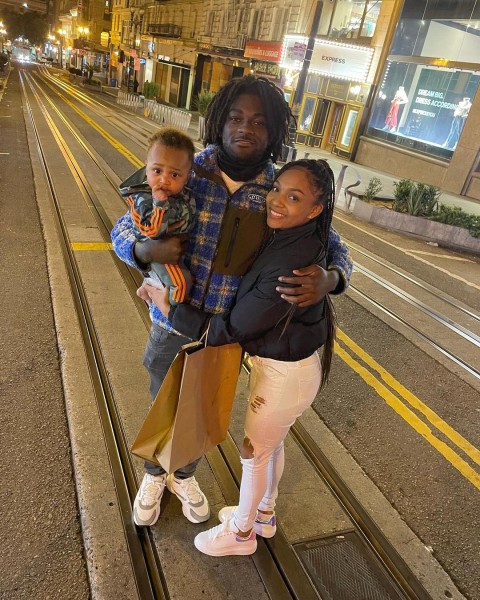 Brandon along with his girlfriend and their son SOURCE: [email protected]

In October 2020, Brandon and Rochelle welcomed their first child, a son, Braylon Aiyuk. He shared the news through a post on his Instagram. However, the duo is yet to tie their wedding knot.

Know About Brandon Aiyuk's Salary, Net Worth, and Earnings

Brandon Aiyuk has an estimated net worth of more than $5 Million. He has accumulated most of his net worth through his short career in the NFL. In 2020,  Aiyuk signed a four-year $12.5 million contract with the 49ers. He will be earning a $6.6 million signing bonus and earned an average annual salary of $3,132,836. He is very much early in his career and shall be making millions in the future.