Joshua Primo is a Canadian basketball player. He played college basketball for the Alabama Crimson Tide and declared for the 2021 NBA draft following his freshman season. Besides, he played for Canada's national team at FIBA U19 World Cup.

Toronto, Ontario native, Joshua Primo was born on 24 December 2002, under the star sign Capricorn. He is the son of Michael Primo and Nadia Henery Primo. He has a brother, Michael, and a sister, Keshia, who played on the Buffalo Bulls women's basketball team (2008-09) and Coffeyville (Kansas) Community College, and  Southern Connecticut State University (2010-14). In 2012, his mother died at the age of 51.

Josh Primo is yet to turn a professional basketball player. Most recently, he was playing as the guard for the Alabama Crimson Tide. NBA scouting live has ranked him 73rd in the 2021 Top 100 Prospects rank. He is projected to 2nd round to undrafted.

If Jodh Primo gets to pick in the draft by any of the NBA franchise, his future salary will be in millions. However, to date, he has not earned for playing basketball for school and college team. As of 2021, his net worth is under review.

Josh Primo is currently dating Sophia Coppel. However, there is not much information on how and when the two met. Scrolling through his Instagram, In 2021 January. Further, in the highlight section, he has featured his girlfriend there too. 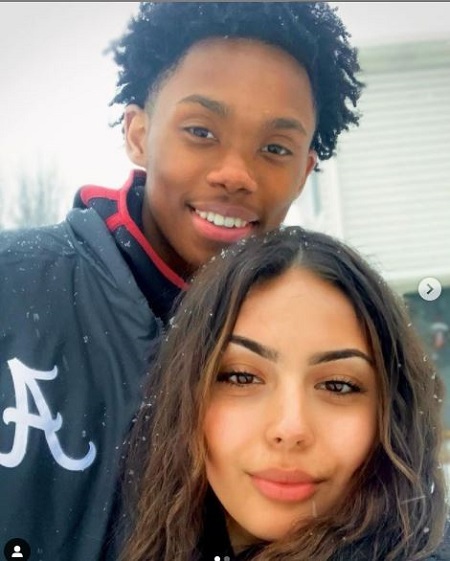 Similarly, Sophia has also uploaded pictures with the basketball players. The two look adorable together.

Josh Primo played the 2018-19 season at Huntington St. Joseph Prep in Huntington, W.Va. He was rated as the No. 3 player in the 2020 North Pole Hoops (NPH) Canadian National Player Rankings.

Also. he was named the youngest player invited to the Canadian National Team for the 2019 FIBA U-19 World Cup.

Listed as a four-star prospect by ESPN.com and Rivals.com, he chose Alabama over the offers from Creighton, Ohio State, Arizona State, Auburn, and California. In his freshman season at Alabama, he played in 30 contests on the season, missing three games due to an MCL sprain, making 19 starts. He averaged 8.1 points and 3.4 rebounds per game, shooting 43.1 percent from the field and 38.1 percent.