He made his international debut for Antigua and Barbuda in 2010.

Net worth and Salary of Josh Parker

Josh Parker has an estimated net worth of $0.5 million as of 2019. His annual salary is reported around €104,000 with a weekly salary of € 2,000 which he earns from playing for Charlton Athletic. 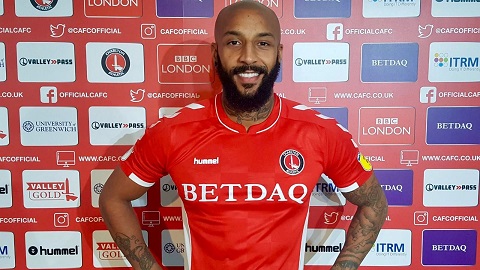 Currently 28, he stands at the height of  5 feet 11 inches. It is not confirmed if the midfielder is married or is in a relationship as there is information about it in the media or to the public. Matter of fact, he has maintained his love life low key.

Hence as per our record, he is possibly single and unmarried.

Josh Parker holds an English nationality and belongs to Antiguan descent. He was born on December 1, 1990, in Slough, England.

After playing for the junior team of Queen Parks Rangers FC, he was promoted to the senior squad in 2009. He was transferred to fellow English clubs such as AFC Wimbledon, Northampton Town and Wycombe Wanderers for the 2010 season as a  part of a loan deal.

He later signed a one year contract with Oldman Athletic in the autumn of 2011 and made his debut against Sheffield United. He was sent to Dagenham & Redbridge as a part of a loan deal in 2012.

After playing for Oxford United in 2012, he moved to Slovenia and signed with Slovenian club, Domzale in the summer of 2013. He later moved to Serbia and signed a two-year contract with the Serbian football club, Red Star Belgarde in early 2015.

Parker was later transferred to the Scottish football club, Aberdeen FC as a part of a loan deal from the Serbian football club in 2015.

After brief playing stint with Wealdstone, he is currently playing for Gillingham FC in 2017 and made his official debut against Port  Vale in English league and scored his first league goal in the same match.

Parker joined Charlton Athletic as a late deadline day transfer, on a six-month deal in January 2019.

Even though he was eligible to play for England, he instead opted to play for Antigua and Barbuda and made his international debut against Suriname on November 10, 2010. He scored his first international goal against Saint Lucia on 8 October 2014 during  2014 Caribbean Cup Qualifiers.