Joseph Paintsil is a popular association footballer from Ghana who plays in the Belgium First Division A club Genk in the midfielder position. Genk, the fourth-time Belgian first division champion locates in the city of Genk in Belgium Limburg. He also plays for the Ghana national team and initially represented his nation for the first time in 2017.

Joseph Paintsil, the proficient player for Genk, has played for numerous football clubs, including Team Youth, Genk, Ferencvaros and Ankaragucu. His footwork and assist vision create chances and a prosperous game mode. His expertise in game-changing and dribbling mastery becomes a major impediment for his opponent. Paintsil is considered one of the successful Ghanaian descent footballers contesting in a foreign league.

On 1 February 1998, Joseph Paintsil, the midfielder for Racing club Genk, was born in  Accra, Ghana, under the sun sign Aquarius. Talking about his age, Paintsil is just 24 years of age as of today. The right-footed player symbolizes himself by wearing jersey number 28 from this club, Genk.

Joseph Paintsil is a tall midfielder who measures height at 6 ft 2 inches or 1.78m and weighs over 66 kg. He has an elongated, shredded physique with a dark skin complexion. For further description, the athlete maintains a healthy body and has long braided black hair.

Joseph's parents are of Ghanaian origin. Like him, his parents also practice the Muslim religion. Joseph Paintsil was born in a well-to-do family where everything appeared in the appropriate place. His parents and relatives live in Ghana, and he often visits them during his time-out time. He has kept his parent's identities hidden at the moment. Thus, thier name and profession remain a riddle.

Indeed, Joseph is not the only child of his parents. He has an elder brother, Seth Paintsil, a footballer by occupation now signed to Admira FC for Modling, Austria of the 2. Liga. Seth has been his greatest companion and a role model to look up to. The Paintsil brothers are each other staunchest backers and share a strong bond.

Joseph Paintsil is a valuable player for Ghana. He partook in most of the school and collegial sports he thought he could play. The Accra-born midfielder has adored football since childhood and has played in every game and tournament coming his way.

The Ghana nationality Kicked off his football journey as a juvenile player for Red Bull Ghana back in 2014. Subsequently playing a year, he joined the Ghana Premier League Tema Youth team in 2015. Shortly after, he was promoted to the senior squad and began his pro career. He earned his Ghana Premier League debut on 12 Feb 2017. Prior to his European move, he scored ten goals in 28 games for Tema Youth during his contract. After that, the club confirmed to loan him to Hungarian side club Ferencvaros at the end of the 2017 season. The former Black star player made his Hungarian NB I debut on 9 September 2017 against Vasas, taking Rui Pedro's place in the lineup. Paintsil's performance was at its peak and proved his worth to the team. His playing-making ability nursed the team in besting numerous games. The ex-Tema Youth man concluded his Ferencvaros tenure with a total of 25 games scoring ten goals. After his release, he was on loan to MKE Ankaragucu for a season.

Joseph Paintsil marked a deal with Genk on 19 August 2018 and made his Belgian First Divison coming off the bench in the match against R. Charleroi S.C. In addition, he scored his first goal for the team against Gent on 7 October. He capped the crown of the Belgian First Divison A 2018-19 season with Genk. Joseph, 24 years old, has appeared in 28 Pro leagues playing 1148 minutes in total.

Joseph Paintsil, the crucial and skilled playmaker for Genk, is the 85th out of 400 midfielders ranked in the world. As of 2022, he made just four international appearances for Ghana national team scoring three goals to his name. Reportedly, he is all set to make his first world cup presence in Qatar's 2022 FIFA World Cup.

Joseph Paintsil sorrowed his first career injury(unknown) during the 2018 season with Club Genk. Due to this, he missed three league games and four Europa League qualifiers. Likewise, in the match against Charleroi on 13 September 2021, he again injured his knee, compelling him to stay away from soccer for some time. Luckily, everything went well. After two months out with injury, the player returned in the match against Mourscon on 23 November 2021, appearing in starting lineup.

Net worth, salary and market value of Joseph Paintsil

Joseph Paintsil, the Ghana team member, passing accuracy and play vision make him the most crucial and valuable player. The club optimally profited from his incredible ability. His consistent performance for Genk makes him pay well. He is a well-established and earned Ghanaian footballer. According to the sources, Joseph's approximate net worth equals $5 million, including all cars, properties, mansions and bank balance.

With his present club, Joseph earns weekly pay of £9,100 and £4,73,2000 per annum, making him 12 th highest paid Genk player after Bastein Toma with £4,94,000. In addition, the Ghana international has played numerous matches and games for different clubs. Paintsil further gets a cash bonus and other funds for his amazing performance. On top of that, he is featured and collaborates with several brands and companies.

The earnings he gains from it also massively boost his net worth. Per the transfer market, the former Tema youth star is now worth €2.50 million; his most elevated career value was €3.50 million in 2018. His contract with Genk expires on 5 March 2022. ICM Stellar Sports is his agent that handles all his contract deals and transfers.

When it concerns his relationship topic, Fadam raised the midfielder doesn't feel comfortable sharing with the public. He prefers to remain unspoken about it. There is also no sign of his presence with any lady or companion publicly, so it's quite challenging to determine his relationship status presently. Paintsil being a private and self-centered individual, has held his life low-key, due to which no talk and buzz regarding his love life is known to the masses. Thus, he is assumed to be single as of now.

The prudent midfield player is media-friendly. He is easily accessible on various social sites. However, he prefers Instagram over others. He has verified his Instagram id with the username @joe_paintsil, with 20.7k followers. He outgives his sports-related and personal happen details through the media outlets to his supporters. 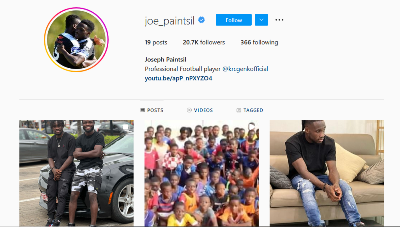 Moreover, he is a huge musicophile and has his own Youtube channel that goes by the name @Jospeh Paintsil. There is just a music video on his Youtube channel.