The French football player Jordan Veretout is a midfielder for Ligue 1 club Marseille and the France national team. Besides, he is a right-footed football player who wears jersey number 27 for his club and has a current market value of €17.00 million.

Jordan is a worldwide famous football player who has mastery in mid-field. Sometimes he also plays as Attacking Midfield and Defensive Midfield. Currently, the footballer has signed with Ligue 1 club Marseille and also plays for his national team in various competitions.

The French professional footballer Jordan Veretout was born on March 1, 1993, to his parents, Sophie Veretout and Lionel Veretout. Besides, his birth name is Jordan Marcel Gilbert Veretout; however, he is popular as Jordan Veretout. Considering Veretout broth details, his star sign is Pisces. Additionally, he grew up in Ancenis, Loire-Atlantique and spent most of his early life there.

Apart from that, Jordan has precisely shared his family details openly on the online platform; therefore, the facts about his father and mother's professions remain unclear for now. Jordan has two sisters whose names are Chloe and Audrey. But again, we don't have anything to share about them at the moment.

Despite the fact that Veretout is a well-known personality, the football player has kept his private life far away from the public reach due to privacy concerns. Luckily we can find some family photos of Jordan on online portals that shows how close he is to his parents and siblings.

Insights On His Career

In his youth career, Veretout played for Belligne and also with Nantes. After that, his senior career also started with Nantes, and he made his debut on May 13, 2011, by playing in a league match against Sedan. Playing from 2011 to 2015, he made 130 appearances for Nantes and scored 14 goals. After leaving Nantes, he signed a deal with Birmingham-based Premier League club Aston Villa on July 31, 2015. 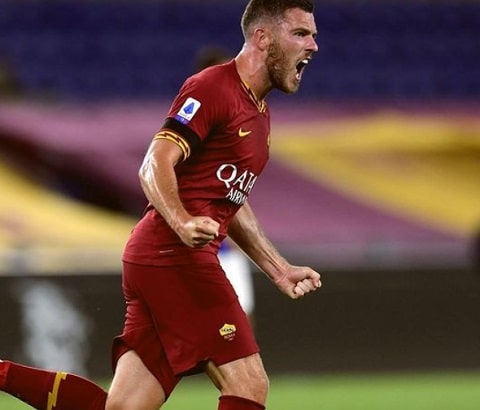 And his debut for the team of Aston Villa came on August 8, 2015, against AFC Bournemouth. After making 25 appearances with Aston Villa, Veretout was loaned to AS Saint-Etienne on August 23, 2016, for one year. While representing Saint-Etienne in 35 games, he scored three goals.

After that, Veretout moved to Fiorentina, agreeing to a four-year contract and signing it on July 25, 2017. And on July 20, 2019, he went on to play for Roma on loan and joined permanently on July 1, 2020. Making 65 appearances and scoring 14 goals, Veretout had an amazing experience with the team. And on August 5, 2022, Veretout signed for Ligue 1 club Marseille. 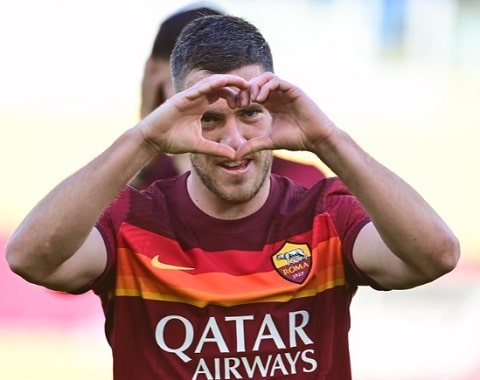 Talking about his international career, Veretout has represented under-18 through to under-21 level in various games. Veretout also helped his team to win the 2013 FIFA U-20 World Cup. And his performance impressed many people, and finally, on August 26, 2021, Veretout received his first call to the France senior team. So, he made his international senior debut while playing against Bosnia and Herzegovina in the 2022 FIFA World Cup qualification game.

So, representing the national team, Veretout may earn in the same range. Besides, Veretout has been a part of multiple teams in the past with whom he signed a deal that is over six figures. While coming to Marseille, his transfer fee was €11 million. While joining Roma, he initially signed a contract worth €16 million, potentially rising to €18 million. 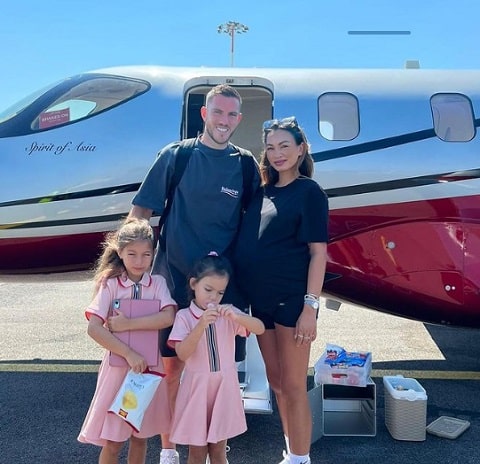 Jordan Veretout with his family in front of a jet SOURCE: Instagram @jordanveretout

Similarly, he played for Fiorentina, and the transfer fee was €7 million. Concluding the fact, it is believed that, Veretout's net worth is not less than a million dollars. His Instagram account also shows that Veretout enjoys a lavish life as he often posts images of visiting different places.

People are more than excited to explore Jordan Veretout's marital status and lovelife. Further, he is married and has his own small but happy family. Besides being a professional footballer, Jordan is also a caring and loving husband and father. Additionally, Veretout is happily married to his beautiful wife, Sabrina.

Jordan and Sabrina are also the parents of two beautiful kids and both daughters named Rose and Nantes. Well, there are not many details about Sabrina and Jordan's marital life, including their wedding date and venue, but we are pretty sure that the couple has been together for many years. 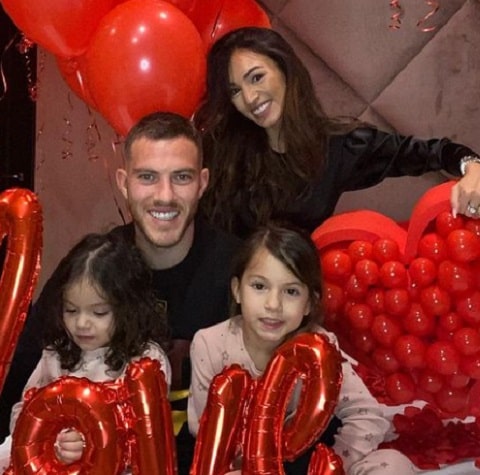 In addition, Jordan and Sabrina often travel and visits different pictures whenever Jordan is free; thus, we can see that both lovebirds are a couple of goals and are great parents too.

The right-footed footballer Jordan is more active on Instagram, and he prefers sharing his daily life updates on it over anything else. Further, we can follow him on the platform under the username @jordanveretout, where more than 215k people follow him, and the athlete communicates with his fans online.

For your concern, Jordan is fond of sharing football-related content, and he shares glimpses of his match with his fans online.