Jordan Bohannon is an American college basketball player who played for the Iowa Hawkeyes of the Big Ten Conference from 2016 to 2022. Notable, he is the Iowa Mr. Basketball (2016), Big Ten All-Freshman Team (2017), and Third-team All-Big Ten – Coaches (2019).

Marion, Iowa native, Jordan Bohannon was born on 19th June 1997, under the star sign Gemini. The twenty-three years old is an American by nationality who came from a white ethnic background. Further, he stands 6 ft 1 in (1.85 m) tall and weighs 175 lb (79 kg).

It is still unknown if Jordan Bohannon is dating or single. Scrolling through his Instagram, on 23rd July 2020, he shared a picture with a lady named, Carlie Long. The picture is a little cozy which reads, "Big fans of the color yellow." Nothing is known about their relationship. 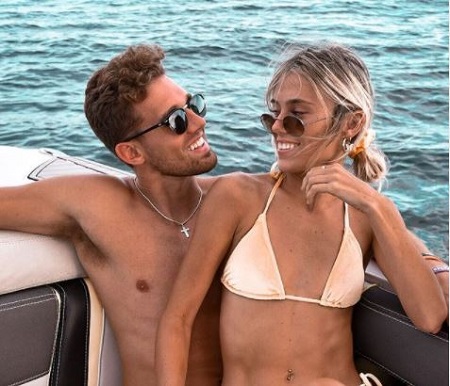 Besides, there is less to no information regarding his love life. As of now, he is possibly single.

Jordan Bohannon was born to Brenda and Gordy Bohannon, who played quarterback for Iowa. He has three elder brothers: Jason, who earned Iowa Mr. Basketball honors at Linn-Mar High School and played for Wisconsin before a brief professional career in the United States and Germany, Matt played for Northern Iowa, Zach played for Air Force and Wisconsin.

Bohannon enrolled at the Linn-Mar High School where he was a four-year varsity basketball starter and captain. He averaged 25.8 points and 5.3 rebounds per game, leading his team to a 17–6 record and the Class 4A sub-state final as a senior. Besides, he played golf for four years.

Before his senior season, he committed to play for Iowa. By the end of his high school career, ESPN considered him a four-star recruit and the top player in Iowa.

After playing 10 games as a senior, he announced that he would undergo season-ending surgery for a left hip injury on 16th December 2020. Patrick McCaffery and Luka Garza are on the same team.

How Much Is Jordan Bohannon Net Worth?

Not to mention, Jordan is yet to turn professional but has played in college. He is yet to generate money from his basketball career, hence, his salary and net worth as of 2022 are unknown. The ultimate goal of every college athlete is to get a draft in the NBA. The average player salary is roughly $7 million, according to Basketball-Reference. The median salary, or middle salary among all NBA players, is $2.96 million.