Jon Scheyer is an Israeli American professional basketball player turned coach who is the current associate head coach of the Duke Blue Devils. On 3rd June 2021, he was named the head coach in waiting of the Duke men's team: Scheyer will take over the program after the 2021–22 season when Mike Krzyzewski retires.

Since 2014, Jon Scheyer is with Duke Blue Devils, starting as an assistant and now associate head coach. His financial detail with the college is yet to disclose.  However, he is already announced would become Duke's next head basketball coach after Mike Krzyzewski's retirement after the end of the 2021–22 season.

Mike Krzyzewski makes $7 million per annum from the Duke. Hence, Jon is believed to make around the same figure in the future.

Jon Scheyer is a married man. He tied the knot with his long-time girlfriend, Marcelle Provencial in May 2017. 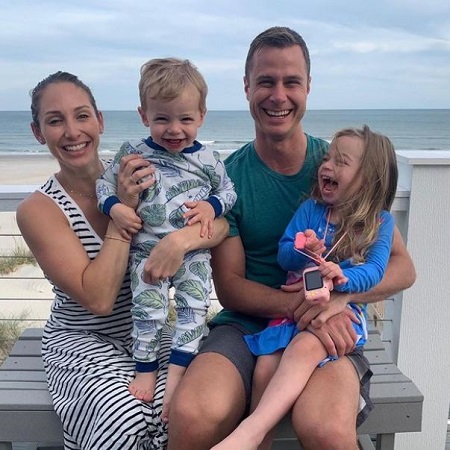 In January 2018, the couple had their first child, a daughter named Noa. In August 2019, the family welcomed a new member a baby boy named Jett.

Scheyer is regular with family posts on his Instagram.

Jon Scheyer enrolled at Glenbrook North High School, where he once scored 21 points in a game's final 75 seconds of play in an attempt to spark a comeback. He was the 4th-leading scorer in Illinois high school history and led the school's team to a state championship in 2005. He was 2006  Illinois Mr. Basketball.

He committed to play for Duke University (2006-10). During his senior year, as Duke's captain, he led the team to ACC regular season and tournament championships, and to the NCAA National Championship in the 2009-10 season. He played the most consecutive games in Duke history (144) and ranked ninth in scoring (2,077 points).

In the 2010 NBA Draft, he was not selected. However, he played for the 2010 Miami Heat Las Vegas summer league team; but, playing for the team in July he was poked in the eye by Golden State's Joe Ingles and suffered a life-changing right eye injury.

Scheyer's eye optic nerve was injured, and he suffered a tear in its retina, which was re-attached surgically. In 2010, he was invited to attain the Los Angeles Clippers training camp and but was waived in the team's reduction to its final roster.

In April 2013, Scheyer joined  Duke's men's basketball staff as a special assistant after the resignation of assistant coach Chris Collins. On 18th April 2014, he was promoted to full assistant coach following the departure of Steve Wojciechowski.

On 6th January 2021, he served as Acting Head Coach for Duke's 83-82 win over Boston College, filling in for Krzyzewski who had to miss the game because he was quarantined after being exposed to COVID-19.