Walker Johnny Silva Barra de Souza well recognized by his ring name Johnny Walker is a Brazilian MMA fighter who is currently signed to the UFC under the Light Heavyweight division. Further, the fighter is ranked #11 in the UFC light heavyweight ranking. A professional since 2013 he has recorded 17-3-0 (win-loss-draw).

Walker was born on March 30, 1992, and is currently 27 years old. A native of Belford Roxo, Rio de Janeiro, Brazil, he holds a Brazilian nationality.

The Brazilian fighter has an estimated net worth of over $0.5 million. His income source is considered his fighting career as well as sponsorships.

Before UFC, he has tenure with various fighting events from which he might have summoned a decent sum. 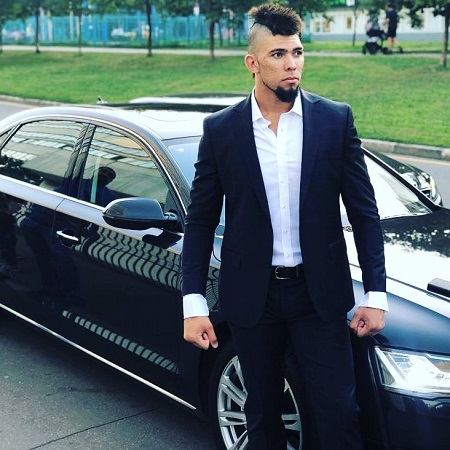 Other than that, he is sponsored by various brands such as Supply Life, Titan, Vitaminshop Aberdeen, Bio Whey Proteins, and Max Titanium.

Being a public figure, he invests some of his income to his lifestyle. Scrolling through his social pages, he is having a splendid life.

Who is Johnny Walker's Girlfriend? 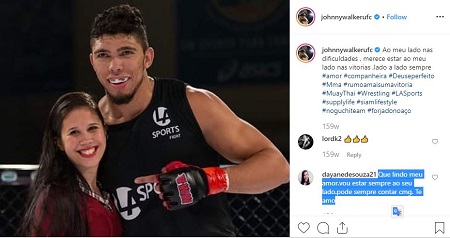 In the picture, Dayane also replied "How beautiful my love. I will always be by your side.can always count cmg. I love you".

Since then, the pretty lady often appears on Walker's Instagram post, not solo but with a group of friends. None of them has clearly talked about their relationship.

In December 2013, Walker made his professional MMA debut in the event at Circuito Invictus de MMA 2. The following for year, he competed in his home country, Brazil, earning a record of 10 wins against 3 losses.

Matter of fact, he entered into the UFC by competing on Dana White's Tuesday Night Contender Series, where he defeated Henrique da Silva.

On November 17, 2018, he made his UFC debut at UFC Fight Night 140, where he defeated Khalil Rountree Jr. also earning his first Performance of the Night bonus award.

On February 2, 2019, he faced Justin Ledet at UFC Fight Night 144. He won the bout via knockout.
At UFC 235, he won against Misha Cirkunov by TKO (flying knee and punches) in round one.