Johnny Bench is a former professional baseball catcher. He played his whole career in the Major Leagues only for Cincinnati Reds from 1967 till the end of 1983. He is also the inductee of the National Baseball Hall of Fame.

Mr. Bench is a two time National League's Most Valuable Player and has the record of winning six division titles, four National League pennants, and two World Series throughout his career.

Johnny Bench is one of the most influential players in baseball. He has an estimated net worth of around $10 million. He was the highest-paid player of his time and used to earn $400,000 as annual salary during the late 1970s.

Upon retirement, he hosted the television series The Baseball Bunch as well as starred as Joe Boyd/Joe Hardy in a Cincinnati stage production of the musical Damn Yankees.

Johnny Bench got married to Vickie Chesser in 1975 but unfortunately, their marriage did not last long and the former couple lived hardly for around a year and split after 1 year of their marriage.

In 1987, he again tied the knot with Laura Cwikowski, an Oklahoma City model and aerobics instructor. The duo shared a son, Bobby Binger Bench. Nevertheless, the couple separated after 8 years of their marriage in 1995. 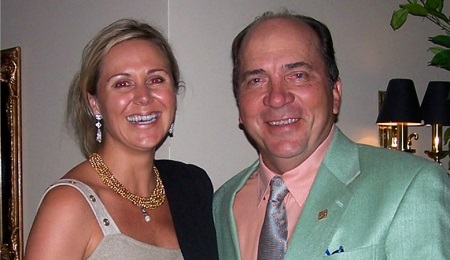 After divorce, Bench and Cwikowski shared custody of their son. According to Bobby, who works in Cincinnati as a production operator on Reds broadcasts state that, "He was, and is, a great dad."

Moreover, Bench's third nuptials, to Elizabeth Benton, took place in 1997. In 2000, Johnny filed for divorce on grounds of one too many people being involved with his wife.

Later, he dated Lauren Baiocchi and they exchanged the vows in 2004. The couple has two children named  Joshua Bench and Justin Bench.

After living in Palm Springs with their two sons, Bench had the urge to move back to South Florida, where he lived from 2014–17, so the family scouted homes in Palm Beach Gardens. In the end, Lauren concluded not moving to Florida, so she and Johnny divorced. As of now, Bench has primary custody of the boys.

Johnny Bench is an avid golf fan and has played golf on the Senior PGA Tour. Further, he has performed in the several Champions Tour tournaments.

Regarded as the greatest catcher in baseball history, Jonny Bench was born on December 7, 1947, and as of July 2018, he is  70 years old.  The Sagittarian American baseball catcher belongs to the white ethnicity.

Son of Ted Bench and Katy BenchJohnny grew up along with his three siblings William, Marilyn, and Teddy Bench. Growing up, Johnny Bench attended Binger High School in Binger, Oklahoma.

Johnny was selected by the Cincinnati Reds and from 1966 to 1967 and he played for the Buffalo Bisons. At the age of 20, he won the Rookie of the Year Award, due to his remarkable performance. Later in 1968, he won National League Gold Glove Award for Catchers.

Johnny Bench MLB career stats are worth to watch. It is pretty awesome. He had 2,048 hits for a .267 batting average with 389 home runs and 1,376 during his 17-year Major League career, and all he achieved with Reds.