John Alberto Guidetti aka John Guidetti is a Swedish professional football player who plays as a striker for Sweden national team and Spanish club Deportivo Alaves.

The 26 year Guidetti started playing since the very early age of 7 and made his international debut since 2007. John Guidetti is also one of those who has been included in the 23-man Swedish squad for the FIFA World Cup 2018.

John Guidetti was born on April 15, 1992, in Stockholm, Sweden. He was born to father, Mike, and mother, Susanne. Guidetti's grandfather is Italian while his grandmother is half Swedish and half Brazilian. He also has one sister whose name is Carmen.

With his hard work and passion in playing, John Guidetti has collected a decent amount of net worth of $8 million in his account. Talking about his salary, his yearly salary is estimated to be around $7.5 million. Currently, his market value is more than $4 million.

So, no doubt that, the player has collected all his net worth through his own effort.

Manchester City bought the player from Bromma in an undisclosed value. While in City, he was always sent to spend loan time in Bromma, Burnley, Feyenoord, Stoke City, and Celtic. Later, Celta de Vigo bought John in a free transfer.

Later, he was again sold to Deportivo Alaves for a total of £3.5 million.

He has also been selected in the 23 man squad of Swedish National Team for the 2018 World Cup. He will be playing alongside Emil Forsberg, Albin Ekdal, Ola Toivonen, and Robin Olsen.

Talking about Guidetti personal life, he is yet to be married. But he has already been engaged with his longtime girlfriend-turned-fiance, Sanna Dahlstrom on May 2016. The couple has already shared two children together. 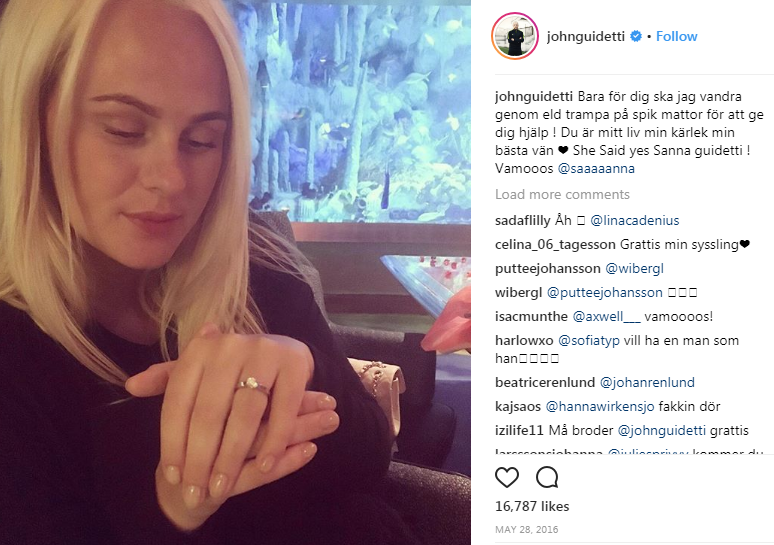