Jimmie Kenneth Johnson a.k.Jimmie Johnson is a professional stock car racing driver who currently competes full-time in the series with his No.48 Chevrolet Camaro ZL1 1LE for Hendrick Motorsports. The 7x champion in the NASCAR Cup Series, he was awarded the fourth-annual Bymsie Award in 2018. Though he has not won a race since 2017, fellow drivers Corey LaJoie, Chase Elliott, William Byron, Bubba Wallace, Alex Bowman, and Ryan Blaney consider him one of the greatest NASCAR drivers of all time.

El Cajon, California native, Jimmie Johnson was born on 17th September 1975, under the star sign Virgo. As per nationality, the forty-four yaers old is an American who belongs to the white ethnic background.

How Much Is Jimmie Johnson Net Worth? Know His Career Earning & Endorsement

With a whopping net worth of $160 million, Jimmie Johnson is one of the richest NASCAR Driver: the third richest to be exact behind Dale Earnhardt Jr. and Jeff Gordon. According to Forbes' 2017 reports, he made $16.8 million as salary/winning and $5 million via endorsement, becoming the 93rd World's Highest-Paid Athletes that year. 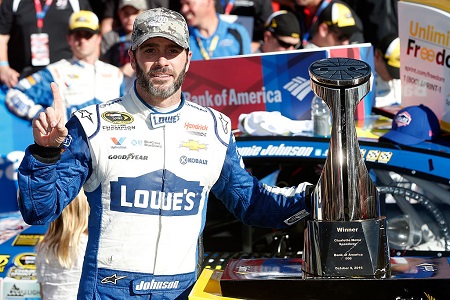 To date, Jimmie has earned over $150 million in career winnings alone. Additionally, endorsements bring $10 million per annum to his bank account. His prominent sponsors are Chevrolet, Gatorade, and Seiko Watch Corporation. What's more, he owns a percentage of a Chevy dealership in San Diego that carries his name.

Charlotte, North Carolina residence, he proudly owns various luxury cars such as the 1971 Chevy Corvette, Chevy SS, 1967 Camaro, and Ford Fusion. Further, he reportdely has a house in New York worth $14.25 million.

Chandra Johnson is the wife of Jimmie Johnson. The couple tied the knot on 10th December 2004. Wifey, Chandra Janway hails from Muskogee, Oklahoma, who is a graduate of the University of Oklahoma with a degree in business communication. Subsequently, she moved to New York City where she started a modeling career. In 2002, Chandra met Jimmie Johnson: thanks to Jeff Gordon and the rest is history.

Jimmie Johnson with his wife and children SOURCE: Architectural Digest

In July 2010, Johnson and his spouse welcomed their first child, daughter Genevieve Marie. Their youngest daughter, Lydia Norriss Johnson was born in 2013. As of now, Chandra is widely involved in the Jimmie Johnson Foundation, an organization dedicated to assisting children, families, and communities in need throughout the United States.

Jimmie Johnson is the son of Gary Ernest Johnson and Catherine Ellen Dunnill. He grew up alongside his two younger brothers, Jarit and Jessie: both made professional off-road racing starts in the TORC: The Off-Road Championship.

For high school, he enrolled at Granite Hills High School. At the time of his graduation in 1993, he excelled as a water polo player, diver, and swimmer. At his school, the number 48 is retired from all sports teams' uniforms at Johnson was inducted into the school's Athletic Hall of Fame.

Since the tender age of four, Johnson started racing motorcycles. After high school, he went on to compete in off-road series. After racing for Mickey Thompson Entertainment Group (MTEG), Short-course Off-road Drivers Association (SODA), and SCORE International, Johnson and his team, Herzog Motorsports, began stock car racing in 1998. Later, he joined the national American Speed Association (ASA) series for late model touring cars, winning the rookie of the year title. In 2000, he signed to the NASCAR Busch Series. 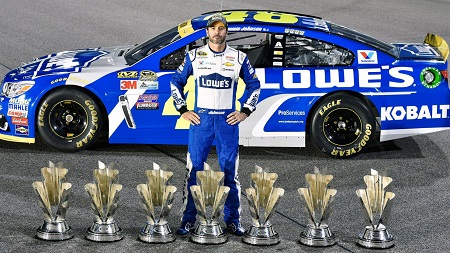 In 2006, got the first taste of Cup Series championship with further victories in 2007, 2008, 2009, and 2010, respectively, becoming the only driver in NASCAR history to win five consecutive championships. In 2013, he won his sixth championship and the seventh championship in 2016.