Jiloan Mahommed Hamad Amin Alla Werdi, famously known as Jiloan Hamad, is a popular professional associational football player playing for Allsvenskan club Orebro SK in the position of the winger. The footballer is also a member of the Iran National Team. Before serving Iraq national team, he also made his appearance for the Sweden national team.

The Orebro SK winger Jiloan Hamad has played for numerous clubs, including BK Forward, Malmo FF, 1899 Hoffenheim, Incheon United, Gorica and many more. During his career, the Iraqi nationality has played with some of the greatest football players like Zlatan Ibrahimovic. Jiloan began his professional soccer career with BK Forward when he was 16.

Jiloan Mahommed Hamad Amin Alla Werdi, the former BK Forward striker, was born on 6 November 1990 in Baku, Azerbaijan SSR, Soviet Union. His zodiac sign is Scorpius as per astrology. Regarding his age, the athlete is just 31 years of as of today. Hamad represents himself wearing jersey no. 11 in the game and serves as a striker for the team. Despite being born in Azerbaijan and of Kurdish descent, Jiloan Hamad is now of Iraqi nationality with an Iraqi and Swedish citizenship card. The player is a dual citizenship card holder. He follows and practices the Muslim religion and beliefs. The footballer's birth took place in a substandard family. He had to face many economic and other basic problems in his family. Tackling all those odds and hurdles, he is now a successful pro footballer. Besides soccer, a 31-year-old striker is also a man of adventure. He quite often hits unique and adventurous destinations. He is also fond of traveling. He is also involved in some social welfare agendas and movements associated with children.

Talking about his physical stats, Hamad stands tall at a good height of 5 ft 8 inches or 1.73m tall and gains weight of over 74 kg. The winger has a well-maintained physique. Hamad has a fair skin tone and black eyes. He has medium black hair with black eyes. Further description, the former Hoffenheim winger is a muscularly built body structure.

Jiloan Hamada, the Allsvenskan 2010 Champion, was born in a football lover family. They family was a huge fan of football. His parents dream of their son being a pro footballer despite their situation. Hamad is born to his caring father, Mohammed Hamad. The Azerbaijan-born winger remains silent regarding his mother. Till now, he has not given details about who is his mother and her name, etc. However, his mother has certainly done a lot for him for the good life he has now.

Mohammed Hamad, a Jiloan father, was an ex-guerrilla warrior in the Kurdish peshmerga. Before fleeing Iraq with his family, he served for fifteen years as a peshmerga. Talking about his mother, she is a housewife. Both of his parents hailed from Ranya, Iraqi Kurdistan. When Jiloan was two years old, his parents pursued refugee status in both Turkmenistan and Russia before moving to Sweden. Hamad's family took a turning point after migrating to Sweden. After living there for quite some time, they also got Sweden citizenship cards. His parents are pure Muslims that believe in Muslim practices and beliefs.

How many siblings does he have?

There are no details concerning his siblings anywhere, so he is believed to be the only child of Hamad's family. We will keep the tabs and update you on this as soon as possible.

You may also read a biography of Kamil Grabara.

The Iraqi nationality footballer Jiloan Hamad was very active and sporty nature. Despite his country and family situation, he still managed to play football in the streets. His love, passion and desire grew even more over time.

The 5 ft 8 inches, 74 kg former Sweden winger kicked off his football journey with BK Forward as a youth player in Sweden. Afterward, he was promoted to the senior squad of BK forward and debuted in his debut pro career in Division 1 Norra at age 16. He just played a 2007-8 season with BK Forward. The following year he joined Malmo FF and made his debut on 17 September 2008 in the game against IF Elfsborg.

During his stay at Mlamo, he fought for the position of left midfielder with his teammate Kimmy Durmaz. Hamad was doing well there. In his five years of tenure there, the Iraqi winger played in a total of 126 games, adding 22 goals to his tally. On 20 October 2013, the 31-year -old footballer Hamad determined to join German club 1899 Hoffenhiemon on a free transfer until 2017. Unfortunately, due to injury, he was loaned to Standard Liege in 2015 for the remainder of the season. Likewise, he played for Hammarby IF, Incheon United from 2019 to 2019, and Goricai from 2019 to 2021. Presently, Sebenska Supercupen 2103 winner Hamad is serving as a winger for the Allsvenskan club Orebro SK. The Azerbaijan-born footballer has played in various leagues in different countries.

After migrating to Sweden, he was qualified to get a Swedish citizenship card. He was also a member and the captain of the U21 Sweden team. He was a crucial player for the Sweden national team. He played from the U17 level to the senior squad till 2018. His parents are of Iraqi descent, so he also held an Iraqi citizen and is eligible to represent Iraq as per his wish. In October 2018, he was first called by Iraq; since then, Hamad has been representing Iraq.

Jiloan Hamad, the Son of Mohammed Hamad, seems to be a self-centered individual. The athlete remains silent regarding his personal life, including love and romance. As of now, he hasn't divulged anything about who he is dating or married to; as a result determining whether Hamad is dating or married is quite challenging. Reportedly, he has shared one of the photographs of a little one who might be his daughter.

Yet, it is still unsure. The winger might perhaps be dating or married person and waiting for the right time to flash to the public. He is not seen publicly with any girl or company, so he is assumed to be single.

As per the sources, Hamd has an approximate worth of $2 million. In the 15 years of his soccer journey, he has played in several top clubs in different nations. He is one of the well-paid Iraqi football in the Allsvenskan club. So we can presume the fund he has acquired till now. When he signed a deal with Orebro SK, he netted a weekly paycheck of $2750 and $33000 per annum. Recently, he resided in an extravagant lifestyle with his family. 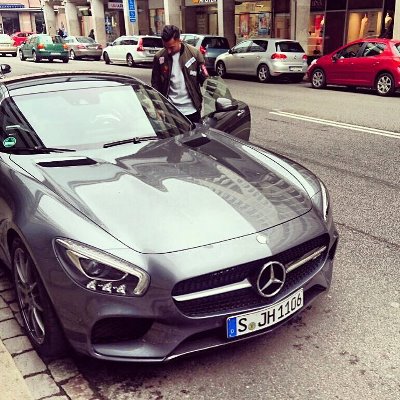 On top of that, he also earned huge fortunes from his endorsement deals and commercial ads.

As per the transfer market, Jiloan holds the trending market worth €600K as of 2022.