Jil Teichmann is a professional tennis player from Switzerland. She plays in both singles and doubles. According to the Women's Tennis Association, the Swiss player is currently ranked 34th (highest ranking to date) in world singles and 110 in world doubles. In the 2014 US opens, the former World no.3 junior won the Grand slam title in the girl's double event.

Teichmann is having a good taste of success at the present days. The Swiss player has won a gold medal in mixed doubles at the Summer youth Olympics tennis. She has won various titles in junior level as well. she is a left-handed (two-handed backhand).

Teichman was born on  15 July 1997 in  Barcelona, Spain and she was born and raised there. Her parents are from Zurich Switzerland so she holds a Switzerland citizenship card and also plays representing Switzerland. Her full name is Jil Belen Teichmann and her zodiac sign is cancer. As of 2022, the Spanish-born tennis player is 24 years of age. 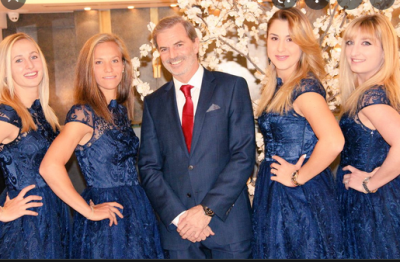 Jil with her family at the occasion SOURCE: Google

Teichman was born to father Regula Teichman and mother Jacques Tecihmaan. she is not only child in her famiuly. She has also got a brother as well and his name is Raul Teichmann. At the very moment, she lives alone in Bennie, Switzerland in her apartment.

The young Swiss player stands tall at the height of 5 feet 7 inches and weighs 57kg. The player has a well-maintained healthy body. For further description, she has blonde hair and blue eyes.

Teichman tried different sports in her youth but then decided to play tennis on the professional level. Talking about her early career she is a former junior world no.3 player and debuted on the IFT Junior Circuit in FEB 2011 at the grade 4 Swiss Junior trophy. The Spanish-born player won her very 1st junior in September 2011.

In total, Teichman won one singles and eight doubles as a junior. 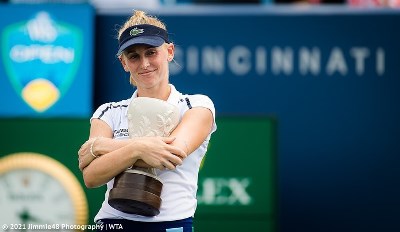 post-match phot after her defeat at the Cincinnati           SOURCE: [email protected]

As a senior professional player, she debuted in February 2013 at the ITF Women's Circuit at the 10k event in Kreuzlingen. The Swiss player won her very first senior title at Prague in May 2019 after beating Karolina Muchova in the final.  Her Prague title win took a huge turn on his career i.e it took her into the top 100 at the ATP rankings.

She is a very hardworking player. Despite her two consecutive losses against Coco Gauff she came back even stronger making progress by getting in the quarter-final at Philip Island Trophy in Melbourne by defeating 3 Iranian players in a row. In March 2021 she also reached the semi-final of the WTA 1000 Championships which led her to the top 50.

Later she also reached the finals of Cincinnati defeating strong players like Naomi Osaka, Belinda Benicice, and many more. Her tennis career journey has been a hell of a ride.

The relationship status of Teichman is quite confidential and unknown to the public. She has not published anything about her relationship and dating status till the present date. But according to the sources, she hasn't been previously engaged and she is believed to be single.

Jil Teichmann net worth and annual earning in 2022

The Swiss player is a well-established player that has been playing for quite some time. She is a role model for many fans.  Observing her career she might have earned a healthy sum of income to date. As of 2022, the player has received the prize money of USD 1649690 from then tennis which includes both singles and double combined. Other than that she also earns good fortunes from the brands and endorsements as well. As of 2022, her estimated net worth is about  USD 1.5 million.

As a professional tennis player, she has been linked and in contract with various brands.  Talking about her sponsors, Nike sponsors Teichman with clothing and footwear. Likewise, Lacoste also sponsors her with the clothing. She is very thankful to her sponsors and promotes it in her social media accounts like Instagram and Twitter.