Jéssica Andrade, also known as Bate Estaca, is a Brazilian mixed martial artist by profession. She is currently signed to the Ultimate Fighting Championship (UFC), where she competes in the Women's Strawweight division. Further, she is the reigning UFC Women's Strawweight Champion. Presently, the fighter is ranked #15 in UFC pound-for-pound rankings.

The 27-years-old is an open lesbian and is married to her partner, Fernanda Gomez. Moreover, her net worth in 2019 is estimated at around $1 million.

Jessica Andrade Net Worth and Career Earnings in 2019

Jéssica Andrade has an estimated net worth of  $1 million as of 2019. There is no fixed salary in MMA, the fighter gets paid per fight.

Currently signd to the UFC, her significant source of income is the fight events. According to the source, she has summoned $1,205,000 as her total UFC career earning. 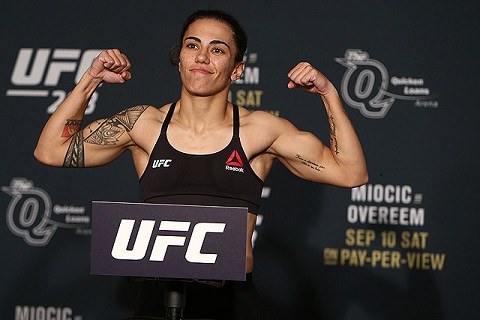 Previously, her net worth was $350,000 and reported to be enjoying a good salary with a total earning of approx. $121,000 annually. Standing 5 ft. 2 in. tall with a weight of 52 kg., this young player is a hardworking and fitness freak person. She follows a very tight schedule that starts from 7 a.m. till late at night. Her schedule mainly contains running, gym, boxing and other different forms of martial arts training.

Andrade is openly a lesbian, so there comes no issue of having a boyfriend. The match between her and Liz Carmouche was the first match between two openly gay fighters in the history of UFC.

Furthermore, UFC Brazilian female fighter Andrade is a married woman. She tied the knot with her girlfriend-friend Fernanda Gomez. The marriage ceremony was held in Las Vegas. The two have been in a relationship for several years. 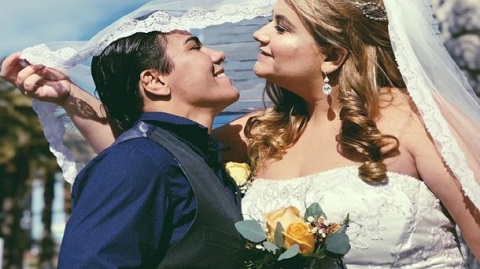 According to the source, Jessica made a proposal to her girlfriend in 2017 after the battle with Joanna Jedrzejczyk, which ended with the defeat of Andrade.

Born on September 25, 1991, at Umuarama, Paraná, Brazil, Jéssica was a martial arts fan from an early age. She used to do judo during her school days and immediately after the completion of her high school, she got engaged in the training of jiu-jitsu.

After eight months of training, she got a chance to compete in a pro fight i.e. in 2011. She does not have any further degree than her high school as she straightly got into MMA after her school. Before achieving success in MMA, she has worked in a pharmacy, “Pesque e Pague” (a place with lakes where people can catch fish and pay for the first fish they catch), and also as a truck driver.

Her style of fight ranges from Brazilian jiu-jitsu to Muay Thai to kickboxing. She started her career as a martial artist on September 6, 2011, where she played at Sagaz Combat in her hometown Umuarama, Brazil. She handed her first victory in her debut game. The first eight out of ten games was won by her in her native land. Her first game as a martial artist at UFC was on July 23, 2013. In 2014, she was ranked in the 9th position as per the UFC bantamweight rankings.

At UFC on Fox 28, Andrade defeated Tecia Torres on February 24, 2018. Similarly, she faced Karolina Kowalkiewicz on September 8, 2018, at UFC 228 and again won the fight. This victory earned her the Performance of the Night award.

On May 11, 2019, Andrade took up to Rose Namajunas for the UFC Women's Strawweight Championship at   UFC 237. She won the bout via knockout in the 2nd round, which earned her the Fight of the Night as well as the performance of the Night award.

Till date she has won a total of 20 tournaments out of 26 and is still determined to win more in the near future.