Jerry Jeudy is an American football wide receiver who is currently signed to the Denver Broncos of the National Football League (NFL). He finished his collegiate career at Alabama and was selected by the Broncos with the 15th overall pick of the 2020 NFL Draft.

Deerfield Beach, Florida native, Jerry Jeudy was born on 24th April 1999, under the star sign Taurus. He holds an American nationality and is of Haitian Descent. The twenty-two years old stands 6 ft 1 in (1.85 m) tall and weighs 193 lb (88 kg).

As of 2021, Jerry Jeudy's net worth is approximately $4 million.

Jeudy's parents divorced when he was young, and became his mom's, little right-hand man. He has an older brother Terry, and sisters, Diane and Aaliyah.

His mother, Marie came to the U.S. from Haiti when she was 14. Every summer, she would take her kids back to Haiti for what Constant called "a humbling experience."

Jeudy's early life was not easy. His mother had saved to support the family through the years, selling purses and lotions out of her car to supplement her paycheck.

Jeudy used to tell his mom "When I get older, I'm going to buy you a house."

In the year 2020, Jeudy gifted her mom the house of her dreams.

Babby dada, Jerry Jeudy shares a beautiful daughter, Journee Aaliyah with his girlfriend Ja'Nice Thomas. Ja’Nice is she is from Pompano Beach and is an entrepreneur, owns a business called Sweet Tooth.

There is not much information about their relationship on media. 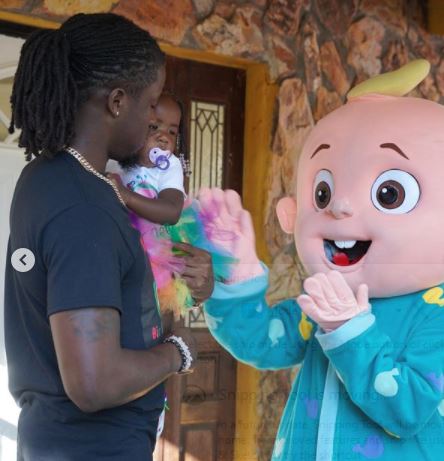 Jeudy enrolled at the  Deerfield Beach High School where he played high school football. As a senior, he had 76 receptions for 1,054 yards and 15 touchdowns in 2016. rated a five-star recruit, Jeudy is the third highest-rated wide receiver in the country. Also, he was the  21st highest-rated recruit overall by the 247Sports Composite.

On 28th July 2016, he committed to the University of Alabama to play college football.
During his sophomore at Alabama, he was awarded the Fred Biletnikoff Award as the nation's best wide receiver. Further, he was Consensus All-American (2018) and 2× First-Team All-SEC (2018, 2019).

In January 2020, Jeudy announced he would forgo his senior season by entering the 2020 NFL Draft.

In the 2021 NFL Draft, he was picked by the Denver Broncos with the 15th pick in the first round.

On September 14, 2020, Jeudy made his NFL debut in the season opener against the Tennessee Titans, where he recorded 4 receptions for 56 yards in the 14–16 loss. He concluded the season with 9 total drops, tied for second-most in the league with fellow rookie CeeDee Lamb, but PFF credits were 12 drops on the season.