Josiah Wear Ellis a.k.a. Joe Ellis is an American football administrator who currently stands as the President and CEO of the Denver Broncos of the National Football League (NFL). With the team, he is a 2x Super Bowl champion (XXXIII, 50) - as an executive. In 2017, he was named ColoradoBiz’s CEO of the Year and inducted into the Denver and Colorado Tourism Hall of Fame.

Colorado, U.S. native, Joe Ellis was born on 16th November 1958, under the star sign Scorpio. The sixty-one years old is holds an American nationality and belongs to the white ethnic background. On 3rd November 2020, Joe Ellis tested positive for coronavirus and is isolating at home.

The Broncos’ general manager and executive vice president of football operations agreed to a five-year contract, keeping him in control of the team’s football decisions through at least 2021. Although executive pay isn’t made public, his salary is believed to be no less than seven-digit figures.

As of 2020, his net worth is approximately $5 million. Besides, there are no records of his real estate portfolio and any other financial aspects.

Joe Ellis' Wife: Is He Married?

Ellis is married to Ann who was born Anne Woodworth on January 19, 1960, in Cumberland Foreside, Maine. The couple tied the knot on September 8, 1990, in Maine. They have three children: two sons, Si and Zander, and a daughter, Catherine. 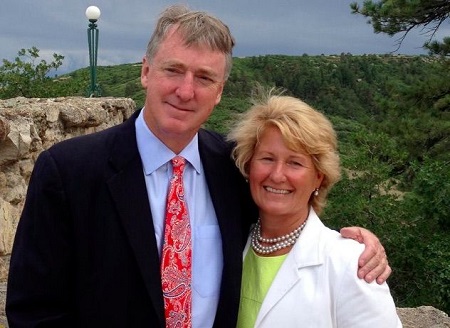 Zander Ellis played football and Lacrosse at Kent Denver High School and later at the University of Texas at Austin. Similarly, Si, enrolled at the Regis Jesuit High School, and in 2014 graduated from Miami University, he now lives in Oxford, Ohio.

The youngest, Catherine born on Sept. 18, 1994, is a former lacrosse player at Kent Denver High and Cornell University.

Upon high school graduation, Ellis attended Colorado College where he earned a bachelor's degree in 1980. He graduated from school at the L. Kellogg School of Management at Northwestern University to obtain his Master's Degree.

Ellis started his career in the NFL in 1983 with the Denver Broncos as their Director of Marketing. Further, he served the league as Vice President of Club Administration and Stadium Management until rejoining the Broncos in 1998 as their Executive Vice President of Business Operations. Joe acted in this capacity for a decade.

In 2008, Joe was appointed the team's, Chief Operating Officer, serving until January 5, 2011. Following his thirteen years-long stints at the Denver Broncos organization, he became the President of the Denver Broncos.