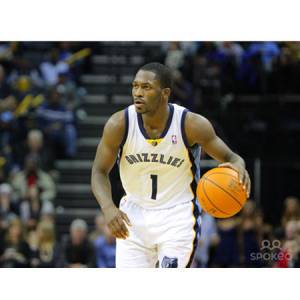 Jeremy Raymon Pargo is a professional basketball player from America who is currently playing for the Golden State Warriors in the National Basketball Association. Earlier, he played for Maccabi Tel Aviv of the Israeli Super League. Jeremy started his professional career in 2009 and plays from the position of a point guard.

Pargo started his professional career playing from the Israeli side Hapoel Gilboa Galil. Afterward, he had played for several teams like Memphis Grizzlies, Cleveland Cavaliers, and Philadelphia 76ers, CSKA Moscow (Russia) and is playing in Maccabi Tel Aviv since 2014. He was in the team of Maccabi Tel Aviv in 2010, where he spent a season. He is also known for being the brother of NBA star Jannero Pargo.

Jeremy Pargo was born on March 17, 1986, in Chicago, Illinois, United States. He is an American by Nationality. His father is Charlie Mae Pargo. He had attended Paul Robeson High School. He has been passionate about basketball since his childhood. He had played basketball since he was in school.

While at Gonzaga University, he had played for the college’s Gonzaga Bulldogs team. He was then voted as the 2008 WCC Player of the year. In 2009, he was featured in the cover of the Sports Illustrated magazine in the March Madness Issue. Not much information is available on his early life.

Quite unfortunately, Jeremey Pargo was not drafted in the 2009 NBA draft. However, in the same year, he participated in the NBA Summer League as a member of Detroit Pistons’ summer league squad. He also played in the Orlando Pro Summer League for Orlando Magic. However, he did not get any contract until then.

He later got a contract from the Israeli club Hapoel Gilboa Galil Elyon in the Israeli Basketball Super League. It was his first break in a professional game where he performed very well, earning the 2009-2010 Israeli Super League Championship and being the fan-favorite for his electrifying dunks over bigger defenders.

In 2013, he signed a two-year contract with the Russian team CSKA Moscow. Later in 2014, the team and Pargo decided to part ways and he joined with the Maccabi Tel Aviv in two years contract. In 2019, he joined NBA G-League signing a contract with Santa Cruz Warriors. In 2019 February, Golden State Warriors signed him on a 10-day contract along with Zach Norvell Jr. He made his debut against Los Angeles Lakers scoring 6 points in 14 minutes with 4 assists and 2 rebounds.

Jeremy Pargo Salary and Net worth

Jeremy is currently signed to Golden State Warriors on a 10-day contract where he reportedly earns a good salary. Earlier, he played for Santa Cruz Warriors where his annual salary in 2019 was $81,677. Earlier, he played in Russia signing a two year, $5.2 million deal with CSKA Moscow.

Moreover, Prago also played in China signing a $2+ million deal. His net worth in 2020 is estimated to be around $1 million.

Jeremy stands the height of 6 feet and two inches height with the accompanying body weight of 99 kg. He is 29 years old.

Moving on to his personal life, the information on his affair and girlfriend is hidden. It is also not known if he is married and has children or is currently in a relationship, dating any girl. He has not disclosed any information regarding his personal life. He may not want to come into rumors and public attention like his brother for the reason.

Jeremy is admired by many people. He is not a much-established name in the NBA as he has not been the prominent part. However, he is much known and liked in Israel where he had made his professional debut. More on Jeremy can be found in different internet websites like Wikipedia, Rotten Tomatoes, etc, which locates his biography, news, pictures and other information on him.