Jerami Grant is an American professional basketball player. As of 2019, Grant plays for the Oklahoma City Thunder of the National Basketball Association (NBA). Grant played college basketball for the Syracuse University and was picked 39th overall by Philadelphia 76ers in the 2014 NBA draft on 26th June 2014.

Grant who most often plays as small forward, and Power forward currently has an estimated net worth around $9 million. Like other public figures, he prefers his love life low profile.

Jerami Grant Net worth and Salary

As of 2019, the net worth of Jerami Grant is estimated to be around $9 million. Professional basketball player, Grant earns a tremendous amount of money from his career. Grant previously played for the Philadelphia 76ers of NBA.

Jerami Grant is much more secretive regarding his personal life. However, the well-known and skilled NBA player Grant is not married yet. Moreover, he is not dating anyone at the current moment. Similarly, there are no records of Grant's past relationships and affairs too. 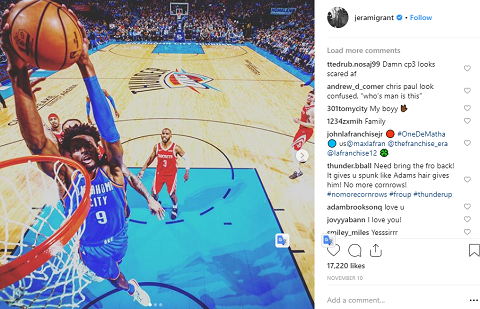 Grant is also active in social media including Instagram, Facebook, and Twitter. But so far, he hasn't shared photos of girls which make people feel doubt about his affairs. As Grant is not married and is not dating anyone, his sexual orientation is straight.

To date, Grant hasn't done or said anything that makes people doubt about his sexuality. Rather than being involved in any kind of personal stuff, Grant might be focusing on his career.

Jerami Grant was born on 12th March 1994, in Portland, Oregon, United States. His parents are father Harvey Grant and mother Beverly Grant. His father is a former basketball player.

Grant grew up along with his siblings, brothers Jerian Grant, Jerai Grant, and Jaelin Grant. 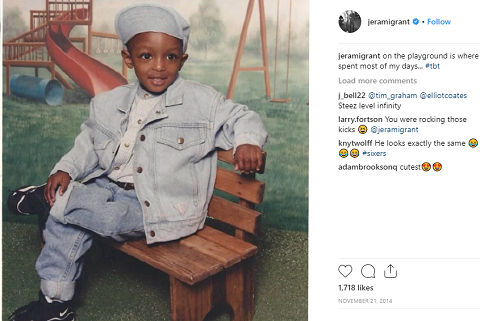 Jerami Grant averaged 12.5 points in 23 games as a senior during his high school basketball career. ESPN.com considered him the four-star recruit and was further listed as the No. 11 power forward and the No. 37 player in the nation in 2012.

Similarly, during his college basketball career, Grant averaged 12.1 points, 6.8 rebounds and 1.4 assists per game. In the 2014 NBA draft, Grant was drafted by Philadelphia 76ers with the 39th overall pick on 26th June 2014. He played the regular 2014 NBA Summer League and 2015 NBA Summer League for 76ers.

Later, Grant was traded to Oklahoma City Thunder on 1st November 2016 in exchange of Ersan Ilyasova. He plays alongside Russell Westbrook, Paul George, Dennis Schroder, Andre Roberson, and others. On 7th July 2018, Grant re-signed a three-year contract with Thunder.