Jens Stryger Larsen is a Danish professional football player who plays for Trabzonspor as a defender wearing shirt no. 19.

The young talent previously played for Austria Wien and FC Nordsjaelland, debuting professionally with Brondby in 2009. Since 2016, Jens is also representing his national side, Denmark National Team".

Jens Stryger Larsen was born on February 21, 1991, in Sakskobing, Denmark. His birth sign is Pisces. Talking about his nationality, he is Danish and belongs to the white ethnicity.

Jens began playing football during his childhood. He spent his youth career with Frem Sakskobing, B 1921, Herfolge Boldklub and then moved to Brondby.

The significant source of Jens' earnings is his club contract, salary from the national team, and an endorsement deal with prominent brands, including Adidas. 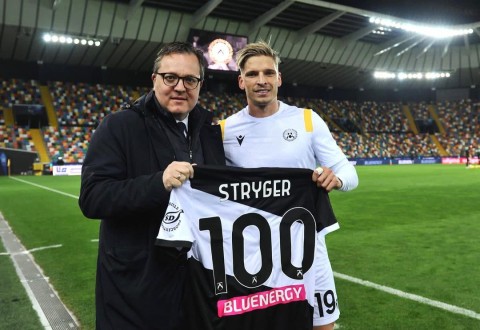 Jens was signed to FC Udinese, earning $23,714 as his weekly salary, i.e., $1.2 million annually. His estimated net worth is around $12 million, including all his assets and income.

His current market value is $2.09 million, and his total transfer procedure is $2.72 million.

After playing a few years with Brondby's youth team, Jens made his professional team debut against FC Nordsjaelland on November 2009. During his time at Brondby, Jens promptly became very popular among Brondby supporters due to his energy.

At the end of his first season and the beginning of his second season, i.e., the 2010-2011 season, he featured in the club's team, keeping players such as Swedish international Alexander Farnerud on the bench.

In August 2010, Jens was named one of the most incredible talents in Denmark by the Danish media. On September 23, Danish football magazine Tipsbladet reported interest in him from Serie A club Genoa.

In 2013, Jens signed to FC Nordsjaelland, where he remained for only one season, playing 30 matches and recording the ultimate two goals.

Jens next signed for Austria Wien. In his three seasons for Wien, he made 63 appearances and scored two goals.

On August 24, 2017, he joined the second oldest Italian club, Udine, signing a 4-year contract for a transfer of $1.88 million until June 30, 2021. After the contract expired in 2021, The player moved to Turkey and joined Trabzonspor.

Jens has represented his national side at senior and junior levels, playing at various tournaments. He was part of Denmark's U16, U17, U18, and U19 national teams. He played the 2010-2011 seasons, representing Denmark U-21 national team.

On November 11, 2017, Jens was called up for the 2018 FIFA World Cup qualifier play-off matches against the Republic of Ireland along with his teammates Kasper Schmeichel, Frederik Ronnow, and Jonas Lossl.

So far, Jens has earned forty-nine caps and recorded three goals for his national side.

Jens is pretty open about his relationship status. Following his social media posts, we can be sure that Larsen is married to his longtime girlfriend, Emilie Sylvest. The love birds exchanged their wedding vows in July 2021. They had been dating each other for more than five years before marriage. 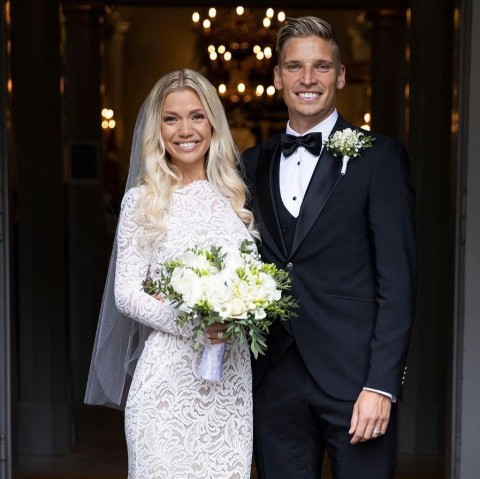 Jens shares a photo of his wedding SOURCE: [email protected]

Jens and Emilie welcomed their first child in May 2022. The player shared the news through his Instagram post.