Brazilian mixed martial artist Jennifer Maia currently competes in the Flyweight division of the Ultimate Fighting Championship. She is ranked 6 in the UFC's flyweight division. Earlier, she competed for several promotions like Invicta FC, Cage Warriors, Immortal FC, etc. She trains at Chute Boxe Academy and has an MMA record of 17-6-1.

The former Invicta FC Flyweight Champion is scheduled to fight Joanne Calderwood at UFC Fight Night: Brunson vs. Shahbazyan. Initially, was scheduled to face Viviane Araújo but the fight was canceled due to coronavirus complications.

Maia's latest bout was against Katlyn Chookagian at UFC UFC 244. She was paid  $16,000 despite the loss. She earned the paycheck of $27,000 after defeating Roxanne Modafferi at UFC on ESPN 4 and received $27,500 after her win against at Alexis Davis UFC Fight Night: Thompson vs Pettis.

Who is Jennier Maia Husband?

The 31-year-old UFC fighter has already married. She is tied in a marital knot with her husband Ed Monstro, who is also her coach, for a couple of years. The couple has not revealed much aboout their married life but is together for several years.

Her partner is a former MMA fighter who currently teaches Muay Thai, Jiu jitsu, and MMA. His MMA record is 11-7-0. He retired from MMA in 2018. 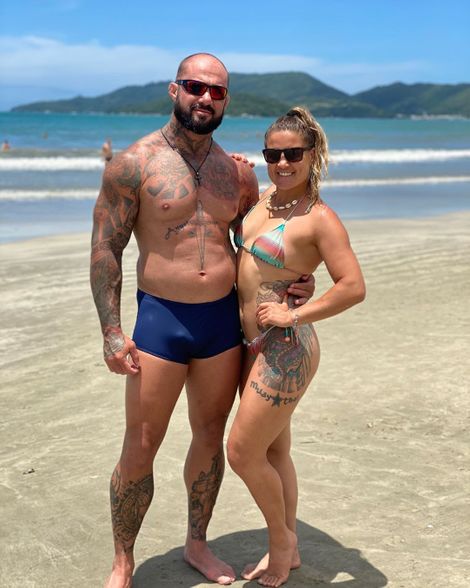 Jennifer Maia with her husband in the beach SOURCE: [email protected]

Maia recently discussed her training during the pandemic and said that she had notrouble in training as her husband is her coach. She said:

“I am lucky that my coach is my husband and I have space in my house, so I am keeping technical and physical training at home as much as possible."

Jennifer Maia was born as Jennifer Gonçalves Maia on October 6, 1988. She is 31 years old as of 2020.  She was born in Curitiba, Paraná, Brazil, and holds a Brazilian nationality. She also has a sister.

Maia is 5 ft 4 in (1.63 m) tall in height and her body weightis reported to be 125 lb (57 kg; 8 st 13 lb). Her fighting style is Brazilian Jiu-Jitsu, Muay Thai, Boxing and fights out of Curitiba, Paraná, Brazil. She currently trains at Chute Boxe Academy.