Jeff Stoutland is a well-known American football coach. He is currently working as the run game coordinator and offensive line coach for the Philadelphia Eagles in the National Football League. Stoutland started his coaching career in 1984, working with the Southern Connecticut State University.

Jeff Stoutland was born on February 10, 1962, in Staten Island, New York. He did not come from a reputed family and shared much about his parents and early life. After graduating from Port Richmond High School, Jeff enrolled at Southern Connecticut State University.

Jeff Stoutland has an estimated net worth of more than $5 Million. He credits most of his net worth to his successful football career. The coach has worked with numerous universities and the NFL team for more than thirty years. While working with Alabama, as per sources, Jeff received an annual salary of $395,000. 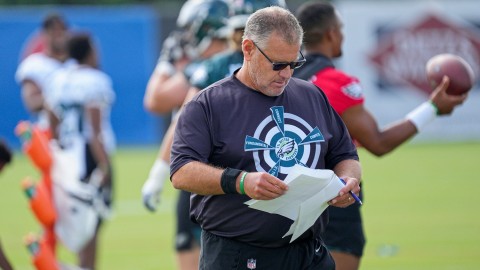 Jeff is working as the Offensive Line coach for the Eagles SOURCE: Getty Images

The linebacker coach earns an average salary is more than $700,000. Jeff must have received a handsome amount as his bonus amount while the Eagles won the Super Bowl LII. Stoutland is very early in his career and will be making millions in the future.

Jeff is a married man living a happy married life with his wife and children. The linebacker's coach is pretty private about his married life. Stoutland exchanged his wedding vows with Allison in the 1990s. They had a private wedding ceremony in front of close friends and family. 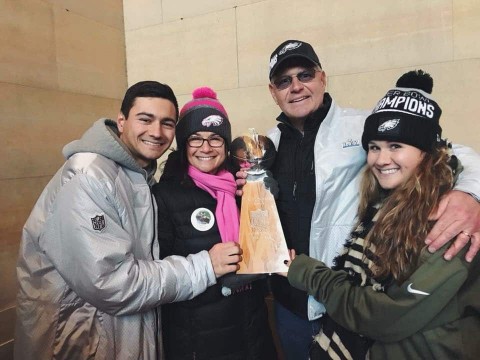 Jeff shares a photo with his family and Super Bowl Titles SOURCE: The Athletic

Jeff and Allison are the proud parents of two children, Jake and Madison. Jeff rarely takes his children to watch his games. He has successfully kept his personal life away from the spotlight.

In 2007, Jeff joined the University of Miami as their offensive line coach and worked as their Interim head coach for the 2010 season. The coach moved to Alabama in the 2011 season and was hired by the Philadelphia Eagles in 2013. Since then, he has been a regular team member and has worked as Run Game Coordinator since 2018. Jeff was part of the team winning the 2017 Super Bowl.