Jeff O'Neill Salary and Net Worth

Other than being a former ice hockey player, Jeffrey "Gerry" O'Neill is pretty famous on social media. He has 142k Twitter followers.

Who is Jeff O'Neill's Wife? (Divorce and Children)

Jeff O'Neill was married to his girlfriend, Lydia O'Neill. The couple lived a happy married life for some years. However, the couple later separated and are now divorced.

Further, with his former wife, he has three children named Irelynn, Charley, and Ellie. The former couple lost their first child, a son, to a miscarriage.

Jeff O'Neill keeps posting photos of his children on his social media pages. This shows his intense love for his kids.

Facts and stats of Jeff O'Neill

Jeffrey "Gerry" O'Neill was not only a world-class athlete but also has a very attractive individual. The former ice hockey player is 6 feet 1 inch in height and weighs around 88 kg.

Jeffrey "Gerry" O'Neill was born on February 23, 1976, in King City, Ontario. As per his nationality, he is Canadian. Further, his star sign is Pisces. He grew up along with his siblings, Don O'Neill, and Ryan O'Neill.

O'Neill was selected in the first round, fifth overall by the Hartford Whalers (now Carolina Hurricanes) in the 1994 NHL Entry Draft. He went on to play the 2002 Stanley Cup Final with the Hurricanes before losing to the Detroit Red Wings. He was further selected to the Eastern Conference team for the 2002–03 NHL All-Star Game. 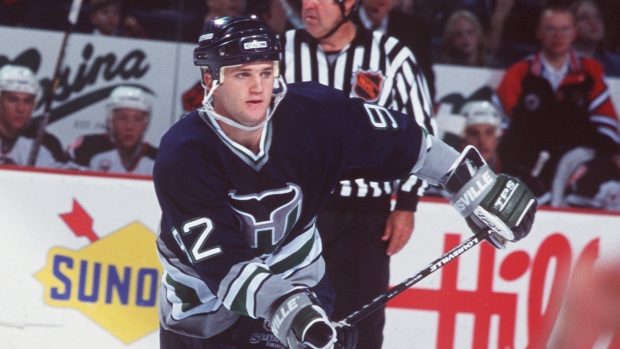 He was invited to the Carolina Hurricanes 2008-09 Training Camp, but couldn't make the final roster and was therefore released.