Jeff Lebby is a rising American football coach. He is currently working as the offensive coordinator and quarterback coach for the University of Oklahoma. Lebby started working as a coach in 2007. Lebby played football in his early days but later shifted to coaching.

Jeff Lebby was born on January 5, 1984, in McGregor, Texas. He is the son of Mike Lebby and his wife. His father worked as an American football coach at Victoria Memorial Texas High School. After graduating from Andrews High School, Lebby enrolled at the University of Oklahoma.

Jeff Lebby has an estimated net worth of more than $3 Million. He has earned most of his net worth through his successful career as a coach for numerous universities. He is among the highest-earning assistant coach currently working in all of college football. As per sources, The coach took home a salary of $700,000 while working with the University of Central Florida for two seasons. 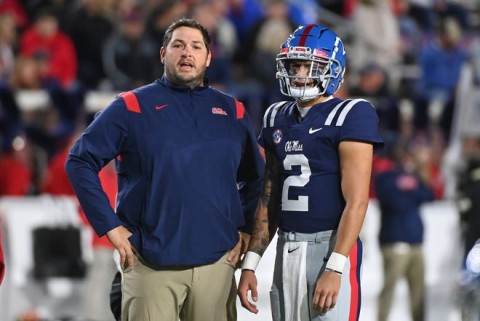 Jeff is working as the offensive Coordinator for Oklaho SOURCE: Yahoo Sports

In 2020, Jeff moved to Ole Miss and raised his salary to $1.2 Million. He worked with the university until late 2021 and signed a new contract with the University of Oklahoma worth $5.7 Million. Lebby will earn a salary of $1.8 Million in 2022 and will raise by $100,000 in each of two years to come. Lebby's deal would make him the highest-paid offensive coordinator in the nation, surpassing Kevin Wilson's $1.4 million salaries. The coach is very early in his career and will be making millions in the future.

Jeff is a married man living a happy married life along with his wife and their children. Jeff walked down his wedding aisle with his longtime girlfriend, Staley Briles. The duo exchanged their wedding vows in the mid-2000s. They had a private wedding ceremony with their family and close friends.

Jeffy and Staley are the proud parents of two children, a daughter, Kora, and one son, Kane. Jeff is very close to his family and often takes his children to his games.

Jeff started his career as an American football player. He was part of the Oklahoma State Football team, but an injury ended his playing career in college. Lebby started working as a student assistant for his alma mater and left Oklahoma to coach the offensive line and tight ends at Victoria High School in 2007. In 2008, Baylor University hired him as their new assistant director of football operations. From 2012 until 2014, Jeff worked as a running back coach.

At the end of the contract with Baylor, Lebby worked as their Offensive Running Coach. In 2017, The coach moved to Southeastern University as offensive coordinator. He helped lead Southeastern to the Mid-South Conference Sun Division title. In late 2017, Jeff moved to UCF and worked with the team for two seasons. In December 2019, Ole Miss hired him as the new Offensive Coordinator and Quarterback coach. In December 2021, Oklahoma signed a deal with Lebby as their new offensive coordinator.