Gossip Jay Gruden Coaching Tree: What Is He Currently Doing?

Jay Gruden Coaching Tree: What Is He Currently Doing?

When fans hear the name Jay Gruden one thing pops into their mind, and that would be a man who achieved it all. Not only did Jay have an impressive run as a player, but also is one of the most successful American Football coaches. Holding the post of head coach for multiple teams throughout his career, Gruden also is an inductee of the Arena Football Hall of Fame as a player.

As a player alone, Jay holds four ArenaBowl Championships. And later on, as a team coach, he led them to victory twice in the said league. Similarly, the talented athlete and coach, Gruden, also led his team to victory in Superbowl XXXVII. Throughout his career, Jay is mainly known for his offensive plays, so he mostly worked as the offensive coordinator for many teams. And here's what Gruden is doing in 2022!

One of the most memorable moments in his career was when Jay Gruden and Sean McVay worked together. Gruden and McVay worked with the Tampa Bay Buccaneers and the Florida Tuskers. And now, after a decade or so, Jay and Sean have partnered up again while working for Los Angeles Rams. 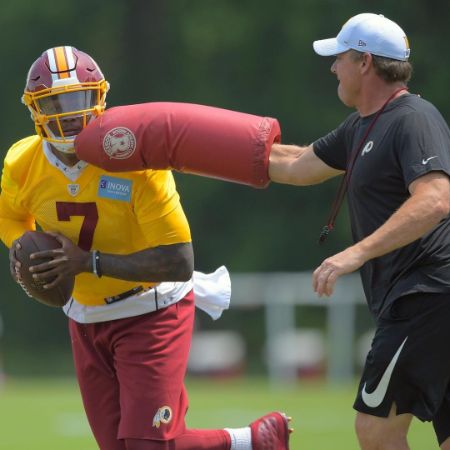 Although Jay's 2020 season wasn't as spectacular as his long career, 2022 has been much better for Gruden. After he was fired from Jacksonville Jaguars in 2020, he spent a year away from the spotlight. And now, Gruden remotely works as the LA Rams' offensive consultant.

For over two decades, Jay has been a part of football in one form or the other. And the Rams' offensive consultant started his coaching journey as an offensive coordinator in 1997. And in the following year, Gruden became a head coach.

But after the devastating 2020 season, Jay's slowly getting his groove back. But will the Los Angeles Rams' losing streak to the San Francisco 49ers affect Gruden's future as a coach? Only time can tell how Jay and his career will move forward after this.

Jay Gruden started his career as a coach in the now-canceled AFL or Arena Football League. In 1997, Gruden debuted as the offensive coordinator for Nashville Kats, an AFL team. 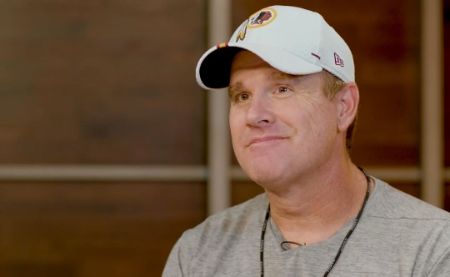 Jay Gruden spent most of his career in the AFL. SOURCE: [email protected]

However, Gruden became the Orlando Predators' head coach only a year in. And he took the Predators and led them to win the ArenaBowl twice in 1998 and 2000.

Aside from AFL, Jay also coached many teams in the minor football leagues. For example, Gruden was the offensive coordinator for Florida Tuskers in the United Football League. After working under Jim Haslett for a year, Jay became to head coach of Tuskers. And Gruden also holds a successful run in the NFL scene too!

Freshly joining the National Football League, Jay Gruden joined his brother Jon Gruden as his offensive assistant. And Jay joined his brother in Tampa Bay Buccaneers while Jon was the head coach. And the Super Bowl XXXVII is often referred to by the fans as Gruden Bowl. 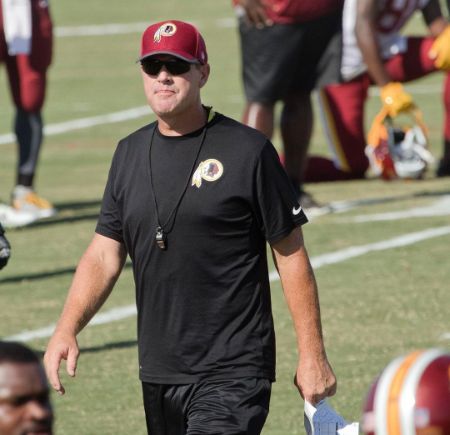 The Buccaneers won the Super Bowl after Jay joined their banner in 2002. However, the Raiders' loss caused a riot in Oakland. And on that day, angry Oakland Raiders fans destroyed twelve cars.

And for six years, Jay and Jon coached Tampa Bay Buccaneers. But in the 2008 football season, Jon was fired as the coach of the Buccaneers. And so, Jay packed his stuff and left with his brother.

Jay, the Offensive Coordinator, found success in other NFL teams but never won another Super Bowl.

After he departed from Tampa Bay Buccaneers, Jay Gruden fiddled in the AFL and rejoined the NFL scene. On February 3rd, 2011, Cincinnati Bengals hired Jay as their offensive coordinator.

The Bengals offered a three-year extension to Gruden on January 13th, 2012. And at the time, Jay had the chance to take up the job of a head coach in three different NFL teams. But Gruden decided to stick with the Bengals for two more years.

Jay became the head coach of the Washington Redskins after Mike Shanahan!

After a couple of years as one of the most successful coaches in America, Jay became the head coach of the Washington Redskins. And he signed under the Redskins on January 9th, 2014, for a five-year contract. And the deal offered an enticing $20 million, given by Dan Snyder.

Halfway through the contract, Jay was offered a two-year extension, which he signed. Likewise, he agreed to the deal on March 4th, 2017, but Gruden would be offed before the extended date.

2019 was a horrible year for Jay as he'd be facing one of the worst seasons in his career. And that ultimately resulted in him losing his job. Redskins fired their head coach on October 7th, 2019. As the Washington Redskins started the season with a startling 0-5.

2020 was another rough year for Jay as a coach. Jay Gruden was training with the Jacksonville Jaguars before the NFL season 2020. SOURCE: [email protected]

However, things for the Jaguars went South fast in 2020. Not only was it their worst season, but their 1-15 record became infamous as the worst in the franchise. And so, after the 2020 season, Jay, Doug, and other coaches from the team lost their jobs with the Jacksonville Jaguars.

And after Jay was let go from the Jaguars, the Los Angeles Rams head coach, Sean McVay, hired Gruden as the offensive consultant in 2022. Interestingly, Jay works remotely for the Rams.