Jay Glazer is an American sportswriter and an insider for Fox Sports of the National Football League(NFL). He is also a business partner with Randy Couture, a mixed martial arts fighter. He is also active in Mixed Martial Arts, where during the offseason he trains NFL players in MMA.

NFL insider for Fox Sports, Jay Glazer, has an estimated net worth of $15 million. His annual salary is reportedly $5 million.

In addition, Jay is also the author of a few books. He also co-authored a famous book Inside the Helmet: My Life as a Sunday Afternoon Warrior together with Michael Strahan. The book costs $ 219.95 for a paperback on Amazon. He is expected to have received a huge amount from book royalty.

Furthermore, Jay is a successful businessman. He owns the Unbreakable Performance Centre, and it is a boutique gym that accommodates sports stars and entertainment figures. Additionally, he has a partnership with Chicago Bears linebacker Brian Urlacher and the U.S. Women's Olympic Volleyball Team captain Lindsey Berg in this business.

In addition to the salary and earnings of Bookselling, Glazer owns a house in New York house. He lives in the house with his son, Samuel and a rescued dog.

Jay Glazer is married to actress Michelle Graci, but that marriage might have just been over. Recent developments indicate that the two have already divorced. His wife, Michelle is seen hanging with Travis Kanafani. This suggests that Michelle married Travis secretly instead. 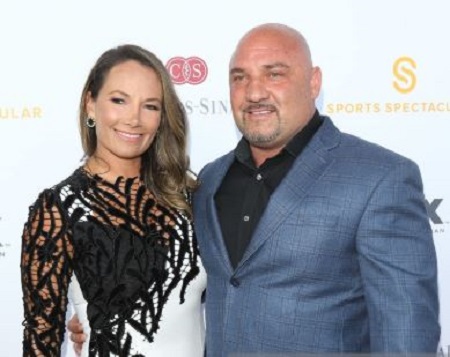 Jay and Michelle were married on 25 July 2006. The marriage was held in Hildene, a historical house in Manchester. The parents of the bride, Lisabeth and Michael Graci attended the marriage ceremony.

Moreover, Graci was a model and winner of Mis New Jersey USA. She's a real estate agent in Los Angeles at the moment. In addition, Jay is the father of a child, Samuel, and also a parent of two rescued dogs.

Jay Glazer was born to Edward A. Glazer and Irene Glazer. Additionally, there is not much information available about his early childhood, and siblings.

Talking about his education, he graduated from Pace University in 1993, graduating with a degree in mass media. Further, he began his writing career as a reporter at the New York Post.

He began his career in the New York Post as a reporter. He also worked as the "Giants Newsweekly" writer. The newspaper was produced by Dave Klein, his longtime friend.

Then Jay interacted with various NFL players such as Jason Sehorn, Aaron Glenn, and Michale Strahan. In addition to working as an NFL reporter, he is also a host for Fox's UFC coverage. He joined Paramount Network and Bellator MMA in the broadcasting team. In addition, he also played minor roles in films such as The Longest Yard, The Game Plan,  and The League and Ballers.

Similarly, he once played the martial arts back in his days. He was trained by Chuck Liddell, Frank Tigg, and Alex Karalexis. Moreover, he appears with Erin Andrews on Thursday night football of Fox network.