Santanyí, Spain native, Jaume Munar was born on 5th May 1997, under the star sign Taurus. Blai and Maria Antonia. The player spent their childhood days in Santanyi, Spain with a younger sister, Antonia. The twenty-four years old stands 1.83 m (6 ft 0 in) tall.

As of July 2021, Jaume Munar is ranked 90th in ATP Prize Money Leaders and his career earning is reported $2,004,105. Among other his popular sponsor is Yonex. As of 2021, his net worth is approximately $1 million.

Jaume Munar is in a relationship with Ines Olari. He often shares their exotic pictures via his Instagram where he has 28.3k followers. Though it's unclear when the two met and started dating, the tennis player first made their relationship public in the fall of 2019 via his IG. 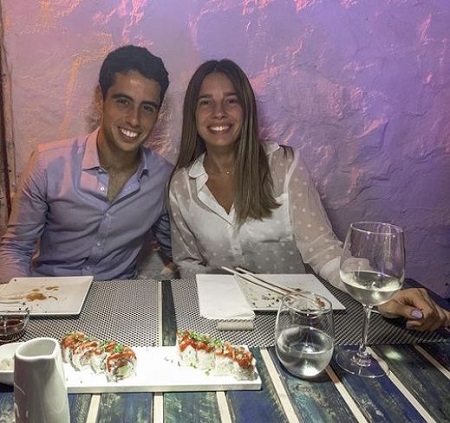 Munar's girlfriend, on the other hand, is a kinda low key person. She has set her Instagram account private and yet to flex to her wag lifestyle.

On 26th January 2015, he had a career-high combined ranking of No. 3, on the junior tour. He reached the 2014 French Open Boys' Final, but he got defeated by Andrey Rublev. On his way to the final, he won against top juniors such as Michael Mmoh and Quentin Halys. Also, he won the Junior Davis Cup 2013.

At the 2015 German Open, Jaume kissed his first ATP Tour win against Guillermo Garcia-Lopez after the world No. 31 retired following three games, and the result brought Munar into the top-500 for the first time.

At the 2018 French Open Munar came from two sets down to defeat compatriot David Ferrer in the first round which is his only ninth ATP/ITF tour match. In the next round, he lost to Novak Djokovic.